Dan Hardy to Face Chris Lytle at UFC on Versus 5 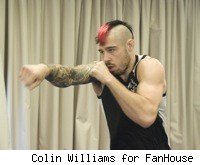 In a match seemingly destined to be a stand-up thriller, Dan Hardy and Chris Lytle have agreed to face each other at the upcoming UFC on Versus 5 event.

The UFC confirmed the fight on Wednesday.

The two welterweights are both respectively known for their willingness to stand and trade, and have lobbied to face each other in recent weeks. Now, they get their wish.

Hardy, though, will come into the fight in desperate need of a win. Though still a popular fighter, the onetime No. 1 contender has dropped three straight, most recently losing a unanimous decision against Anthony Johnson in March. Hardy is 23-9 with one no decision overall.

Meanwhile, Lytle just had his four-fight win streak snapped at February's UFC 127 in a decision loss to Brian Ebersole. Afterward, Lytle briefly contemplated retirement before continuing on. He's 30-18-5 in his long career.

UFC on Versus 5 takes place in Milwaukee on Aug. 14. Other bouts already announced by the UFC include Jim Miller vs. Ben Henderson, Stephan Bonnar vs. Karlos Vemola and Duane Ludwig vs. Amir Sadollah.

On Wednesday, the UFC also confirmed the event has added a lightweight bout pitting Jacob Volkmann against Danny Castillo.