Mark Hominick Says It's Bittersweet to Get Congratulated After a Loss 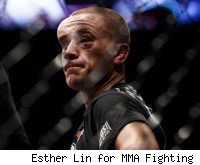 On Monday's episode of The MMA Hour, Mark Hominick had a message for fans who were concerned about the softball-sized lump growing out of his forehead by the end of his featherweight title bout against Jose Aldo at UFC 129: it looked worse than it felt.

And yeah, he knows it looked pretty bad.

"I remember watching fights, like the [Hasim] Rahman [vs. Evander Holyfield] fight, and it was like, oh my God. I could just imagine what the crowd and everybody else was feeling when they saw that, because it's definitely disturbing to see that," Hominick told Ariel Helwani. "But again, it's a superficial injury. It's not affecting my vision; it's not affecting my performance. After I had an icepack on it after the fight, it went right down."

Believe it or not, Hominick said, it didn't even bother him all that much during the fight. Not even when he headed back to his corner after the fourth round and his cornerman elicited a collective wince from the home audience by applying an enswell to the hematoma that had ballooned up over his right eye.


"I don't really remember that part of the fight thinking, oh this hurts or anything like that," Hominick said. "I was just focused on getting back out there."

Hominick may have been hopelessly behind on the judges' scorecards by then, but he wasn't about to give up. He got off his stool for the fifth and final round and gave Aldo all he could handle, battering the champ with unanswered punches on the ground in the final minutes of the fight, at which point he was "feeding off the crowd," Hominick said.

The late comeback wasn't enough to earn him a win, but it did prove Hominick's toughness to many doubters. It also earned him more praise in defeat than he's received in many of his victories.

"It's been huge. Just the feedback from fans and supporters, it's been awesome. It's kind of hard to come off a loss and have everyone come up and say 'congratulations' to you. I was going there to win – that was my intention and my plan and what I trained for. But I put in everything I had. I wanted to win so bad, and I just came up short."

But for giving him the chance to fight on, Hominick is grateful to the cageside doctor in Toronto that night. The lump on his head certainly looked bad to fans, but the doctor examined him carefully to make sure it didn't pose any unnecessary safety risks, and then made the right call in the end, Hominick said.

"Physically, he's asking how I feel and then he's testing my vision, because that's a big thing. If it's affecting my vision, then it has the right to be stopped. But if the vision's fine, I'm feeling fine, there's no reason to stop the fight, and he did a good job. I know there's a lot of pressure on him because being the first show in Ontario, and all the criticism that the show, or mixed martial arts in general, has received over the years, then to have the first show and have an injury like that, he did a great job under pressure."

Still, it's a bittersweet feeling for Hominick to see his stock rise after losing his shot at the UFC title. While it's nice for fans and media to finally recognize his skills, he said, he's not content with being the compelling loser in an exciting fight.

"I don't want to be a guy who just goes out there and puts on daring fights; I want to be a champion, and that's what I'm going to go back to the gym and work on being. Hopefully I'll get a string of wins and I'll get another shot."

If he has his way, his first fight on the path back to the top may come against fellow UFC featherweight Chan Sung Jung, who's better known as "The Korean Zombie." Both fighters expressed their interest in fighting one another via Twitter following UFC 129, and as long as Jung can wait until Hominck's 60-day medical suspension is up, the Canadian said, it's a fight he'd love to have.

"That'd be an awesome fight. I think it'd be a great fight for the fans, and I think it makes sense. He's coming off a big win with Leonard Garcia. There's a lot of guys in the 145[-pound] division – and I'm not trying to be rude – but they don't really have a name in the UFC right now. A lot of people don't know who the people are. Even if I got put against someone that the fans the don't know, it doesn't make sense. This fight, he's fought in the UFC, put on a great fight, put on the twister [submission], so people are excited about that. We both like to go to war, so I think it makes sense."

Now he just has to hope that the UFC agrees.