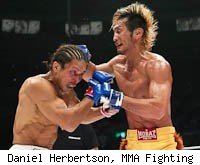 A bout between DREAM lightweight ace Shinya Aoki and former WEC lightweight champion Jamie Varner is being targeted, but sources have indicated that no bout agreement has been signed yet and negotiations may have hit a standstill. UFC veterans Antonio McKee and Willamy Freire were also slated to face Aoki but those bouts also fell through.

The May 29 "Fight for Japan" charity event will be a scaled down version of a regular DREAM event due to power shortages and financial issues following the March 11 Japanese earthquake. The current card for DREAM's first show of 2011 is after the break.