Gus Johnson Signs With Fox but Stays With Showtime 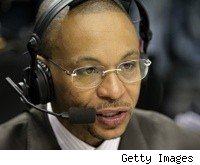 Last week it was revealed that Gus Johnson's contract with CBS had expired, and on Tuesday morning it was reported that Johnson has accepted a job at Fox. But that doesn't mean he's done as the voice of mixed martial arts on Showtime, the sister network of CBS.

Sources told MMAFighting.com that Johnson's contract with CBS was for basketball and football, and that his deal to call fights (both MMA and boxing) for Showtime was a separate contract. That contract is still in effect, and Johnson will call Saturday night's Andre Ward-Arthur Abraham boxing match for Showtime. Although Showtime hasn't yet announced who will broadcast its next MMA show (a June 18 Strikeforce card), Johnson is expected to call that event as well.

Theoretically, it's even possible that Johnson could be back on the CBS airwaves if CBS ever aired another Strikeforce fight: When Johnson called EliteXC and Strikeforce fights on CBS in the past, that was part of his Showtime deal. It's probably a long shot that we'd see Johnson back on CBS, however.

The news that Johnson is leaving CBS got a generally negative reaction from mainstream sports fans and the media, as Johnson is very popular as a college basketball broadcaster, and his style is a perfect fit for March Madness on CBS. But he's less popular among MMA fans, many of whom question whether he really gets the sport.

Still, Johnson is one of the few proponents of MMA among mainstream sports broadcasters. While HBO's lead boxing voice, Jim Lampley, rarely discusses MMA except to compare it unfavorably to boxing, Johnson spoke admiringly about MMA during Saturday night's Manny Pacquiao-Shane Mosley fight, at one point comparing and contrasting the striking styles of the two sports and noting that a punch Pacquiao threw was similar to an MMA Superman punch.

So Johnson remains an MMA fan himself, even if MMA fans are often critical of his work. And even though he's leaving CBS for boxing, his Showtime deal allows him to remain an MMA broadcaster as well.