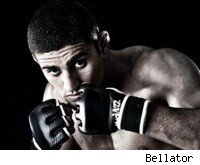 Lima (18-4) has won his last six fights in a row, most recently defeating Terry Martin in 74 seconds at MFC 29 in April.

"In every promotion I've fought in, I've always wanted to be the best welterweight in the division - but with Bellator, this is it," Lima stated in a release. "This is a big organization and I'm going to be fighting on national television on MTV2. This is it for me, finally."

The 23-year-old will be a part of Bellator's upcoming Season 5 welterweight tournament in the fall. No exact date or opponent has been announced for his debut.