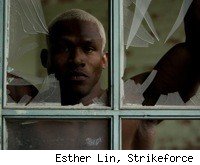 Former UFC heavyweight champion Kevin Randleman returned to action after a one-year layoff Saturday and lost to Baga Agaev via first-round armbar submission in the main event of Mayor's Cup in Russia.

Randleman suffered a dislocated elbow in loss, according to agent Ken Pavia, who accompanied the 39-year-old Randleman to the fight overseas and posted before and after x-rays pictures on Twitter.

Randleman (17-16), last seen fighting for Strikeforce one year ago in a loss to Roger Gracie via rear-naked choke submission, has now lost four in a row.

Danny Downes, Gerald Harris, Efrain Escudero and others also stepped inside the cage over the weekend. Check out some of the notable results below.

-- UFC lightweight Danny Downes (8-1) took a chance fighting outside of the UFC and picked up a triangle choke win over Tory Bogguess at a local Milwaukee MMA card on Friday. Last December, Downes defeated Zhang Tie Quan at the final WEC to ensure himself a spot in an upcoming UFC event.

-- The afro-donning Mamoru Yamaguchi (26-5-3) made his second appearance stateside Friday at Tachi Palace Fight 9 and scored a second-round knockout over Kevin Dunsmoor. A former two-division Shooto champion and current King of the Cage 125-pound titleholder, Yamaguchi has won his last six fights over the last three years. (Video)

-- Also at TPF 9, in a meeting between two UFC veterans, Fabricio Camoes (12-5-1) outpointed The Ultimate Fighter 8 winner Efrain Escudero two rounds to one on all three scorecards for his second straight win since his UFC release. The loss ended Escudero's three-fight win streak compiled after his release from the UFC in September.