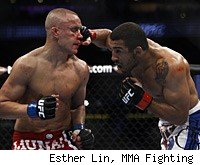 On a day that both UFC lightweight champion Frankie Edgar and challenger Gray Maynard were forced out of their scheduled May 28 bout with injuries sustained in training, it seemed downright ironic that the organization's Las Vegas-based company Zuffa would announce its newest initiative.

In what UFC president Dana White calls a "milestone" for the company, the promotion will provide its UFC and Strikeforce contracted talented with supplementary, year-round insurance that will protect them in case of injuries sustained in training and between bouts. The coverage is a rare development in the history of combat sports, and the news came as a surprise to most fighters and managers in the MMA world, though UFC president Dana White said it had been a goal since day one, and Zuffa co-owner Lorenzo Fertitta added that it had become a laborious three-year process to find a willing insurer.

"As you can imagine, when you walk into an insurance company and say, 'Yeah, we want to get full coverage for 400 ultimate fighters that includes all of their training and all of their lives,' they pretty much slam the door on you pretty quick," Fertitta said in a Monday teleconference.

Under the current terms of its event insurance, Zuffa covered its athletes -- considered independent contractors -- for any injuries stemming from a fight. Effective on June 1, according to Fertitta, fighters will receive $50,000 in annual coverage for any injuries that occur while under contract to Zuffa. The coverage includes expected problems like injuries sustained in the course of training, as well as those brought about in everyday life, like car accidents and falls.

Early reaction from fighters and managers was positive.

"During fight night, we've always had that protection," said longtime veteran Frank Trigg on Monday's edition of The MMA Hour. "It's the eight, 10, 12 weeks before that you always have the problem with. You get hit in the eye and get stitches, you have to pay for it out of pocket. So it's good, I'm glad it came along."

"It's fabulous," added John Fosco, a manager at VF Elite, who oversees the careers of Clay Guida and Travis Browne, among others. "I think that shows the fighters that the UFC really does care. The UFC has been characterized as big corporate giants. Profit first, personnel second. A move like that shows they really do care and they're well aware that if you're not on the highest level, things like that could be tough. Offering insurance at zero cost takes a lot of stress off the fighters."

The insurance won't cover things like a doctor's visit for a cold or flu, but injuries are typically much bigger budget items. In the past, fighters would often work through injuries that should have ruled them out of a fight, or would skip medical attention to avoid a costly bill.

Fertitta said the $50,000 figure would cover things like doctor services, laboratory tests and physical therapy. According to Zuffa general counsel Lawrence Esptein, the number was derived through research. As the UFC looked at injury claims stemming from fights, it found that virtually all were covered within $50,000.

Fighters will not have to contribute to the plan, which is 100 percent paid for by Zuffa, and will be effective no matter where the fighter is located worldwide. This week, the company is hosting its annual "Fighter's Summit," with its athletes in Las Vegas to take part in a series of seminars about the sport's future. Zuffa is taking advantage of that to enroll them in the plan.

Fertitta detailed the three-year journey to get coverage, characterizing it as "long and exhaustive," and admitting that the company had to get "creative" before striking a deal with Houston Casualty Insurance Company. The plan also includes life and dental insurance at no cost to the fighters. He would not divulge Zuffa's cost for the plan, only to say it would be a "substantial expense."

"I think it's good news for fighters," said MMA manager Malki Kawa, who represents Jon Jones and Thiago Alves, among others. "It allows them to deal with whatever issues they have as far as training. In the past, the UFC has been good at taking care of them at events. Now, they have peace of mind that they can train full-time and they know they're covered. That financial strain of, 'What if something happens' up until fight time is lessened."

Most fighters will admit that their lives have been filled with many ups and downs, both in the arena of combat, and away from it. Historically, two of the biggest issues have been injuries and insurance. While at least one past promotion -- the International Fight League -- offered insurance to its fighters, the UFC's offering covers significantly more fighters, helping to lessen the impact of injuries and their subsequent financial cost. Some athletes will still fight their way through in hopes of getting their purse, win bonus, and sponsor money, but at least the alternative of sitting out is not as bad as it once was.

"That's huge for everybody," said featherweight star Mark Hominick during The MMA Hour. "And the training camp, I don't know how many fights I've went in there fighting through an injury. Maybe it's a fight where I should have stepped back and took my time to heal, but sometimes...you do this as a living and you do need to make ends meet sometimes."