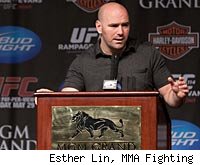 One of the things that has always separated the UFC from sports leagues like the NFL, NBA and MLB is the lack of insurance for UFC fighters for injuries suffered outside the Octagon. But as the UFC grows, that appears to be changing.

Zuffa, the parent company of the UFC and Strikeforce, has announced that its 350 or so fighters, who are all independent contractors, will now be eligible for what it calls "customized accident insurance coverage." The policy will cover not just accidental injuries suffered in training, but also injuries suffered in car accidents or other injuries that have nothing to do with the fighters' MMA careers.

"As this sport continues to grow, we have been working hard to secure additional insurance coverage so that our athletes can perform at the highest levels," UFC President Dana White said in the announcement. "We're proud to give our athletes access to this type of insurance."

Almost as significant as the insurance policy is the fact that the UFC is making a point of publicly addressing the insurance policy. The UFC may be taking note of the fact that other sports leagues -- especially the NFL -- have been criticized for not taking proper care of athletes who suffer injuries, and wanting to get ahead of that issue. UFC Chairman and CEO Lorenzo Fertitta issued a statement explaining the reasoning behind the new insurance policy and will participate in a media conference call to provide more information.

"Our athletes are some of the very best in the world and we've committed significant financial resources to provide them with insurance that complements the gold standard we have set for event-related coverage," Fertitta said. "We're pleased to provide coverage that enables our athletes to seek and receive treatment for injuries sustained while preparing for bouts."

This is a step in the right direction.