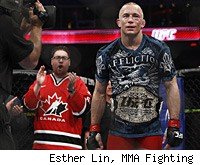 It's hard to believe that Georges St. Pierre could win his ninth straight fight, defending his welterweight title in front of 55,000 fans in one of the biggest events in UFC history, and have it feel like something of a letdown.

But that is how St. Pierre's unanimous decision victory over Jake Shields felt to many fans: We've seen this so many times -- St. Pierre spending 25 minutes demonstrating that the other man in the Octagon is simply nowhere near as good as he is -- that it's starting to feel routine. And that's not how one of the greatest fighters in history stepping into the Octagon should feel.

So are there any challenges remaining in the welterweight division? We'll look at that question as we run down the Top 10 welterweights in MMA.

1. Georges St. Pierre (1): For nine straight fights, St. Pierre has consistently taken on the best the welterweight division has to offer, and consistently shown that he's the better fighter. It's rather amazing to consider that since his upset loss to Matt Serra in 2007, St. Pierre has now spent just shy of 180 minutes -- three hours -- fighting in the Octagon and has never been in any real danger. If he's ever going to be in any danger, it's probably going to need to be at middleweight -- he's just too good for the rest of the welterweight division.

3. Jake Shields (2): Another amazing aspect of St. Pierre's current winning streak is that even though Shields lost a one-sided unanimous decision, he was still more competitive with St. Pierre than anyone else has been in years. Two judges gave two rounds to Shields after no judges had given any rounds to any St. Pierre opponent since the first round of St. Pierre's first fight with Josh Koscheck, nearly three years ago.

2. Jon Fitch (3): Although Fitch has previously been anointed the No. 1 contender in the welterweight division, he's currently nursing an injury and slated to fight B.J. Penn when he returns, so another welterweight title fight isn't coming any time soon for Fitch. There's really no reason to give Fitch another shot at St. Pierre anyway; St. Pierre beat Fitch 50-44, 50-44 and 50-43 two and a half years ago, and a similar result would surely happen if they fought again.

4. Thiago Alves (4): As the best pure striker in the welterweight division, Alves is a lot of fun to watch. But he struggles against superior wrestlers, which makes it hard to see how he'd ever do any better than when he lost a 50-44, 50-45, 50-45 decision to St. Pierre at UFC 100. His upcoming fight with Rick Story will be a good gauge of how well his takedown defense has progressed, but even if he beats Story, that's a long way from beating St. Pierre.

5. Nick Diaz (8): The most interesting fight for St. Pierre at 170 pounds is Diaz, a fight that would unify the UFC and Strikeforce welterweight titles, provide an interesting contrast in styles and be a guaranteed box office draw. It's tough to see Diaz stopping St. Pierre's takedowns, and GSP would be a huge favorite, but it's the best welterweight title fight that could be made. Unfortunately, Diaz is talking about boxing, and the UFC says it doesn't want to take Diaz away from Strikeforce and Showtime at the moment, so this fight may not be coming any time soon.

6. Josh Koscheck (6): With two losses to St. Pierre already, Koscheck has no chance of getting another title shot as long as GSP is around. Koscheck's face is still healing from the beating that St. Pierre's jab put on it five months ago, and there's no word yet on when Koscheck will return.

7. B.J. Penn (5): Like Koscheck, Penn has been beaten by St. Pierre twice and is a long way from earning a third shot at him. Penn is currently nursing an injury and expected to have his rematch with Fitch whenever both of them are healthy.

8. Carlos Condit (9): If the UFC isn't prepared to bring Diaz in from Strikeforce, then Condit is the only other welterweight opponent who makes any sense for St. Pierre because he's the highest-ranked welterweight in the UFC who hasn't lost to St. Pierre yet. But first Condit has a tough fight with Dong Hyun Kim at UFC 132 in July.

9. Diego Sanchez (NR): Sanchez is on a two-fight winning streak, having beaten Paulo Thiago and Martin Kampmann, and if he makes it three in a row by defeating Matt Hughes in the fall, he could also be an option as a future opponent for St. Pierre.

10. Ben Askren (NR): Bellator's welterweight champion stayed undefeated with his fourth straight unanimous decision, beating Nick Thompson at Bellator 40. Jay Hieron will be the next challenge for Askren's belt, becoming Askren's toughest test to date. Askren has boasted that he's a better wrestler than GSP, and he is, although he's too rudimentary as an all-around fighter to pose much of a threat to St. Pierre.