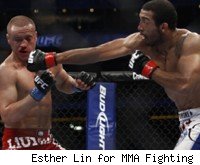 Jose Aldo has now made his UFC debut and won the UFC's first featherweight title fight, an entertaining if not terribly competitive unanimous decision over Mark Hominick at UFC 129. So what does the UFC do with Aldo from here?

The fight I think the UFC really wants to make for Aldo is against Kenny Florian, who has more name recognition than anyone else on the UFC's featherweight roster. If Florian wins his featherweight debut against Diego Nunes at UFC 131, he'll instantly step into title contention -- and into the featherweight Top 10.

But for now, the No. 1 featherweight appears headed toward an August showdown with the undefeated Chad Mendes -- and on my featherweight rankings, that's the right call.

(Number in parentheses is the fighter's rank in the last featherweight list.)

1. Jose Aldo (1): Aldo looked great at UFC 129, but we did see a few chinks in his armor. Off his back with Hominick on top of him he struggled to defend himself, and he appeared to tire as the fight wore on, raising questions about his cardio. He's unquestionably the No. 1 featherweight in MMA, but he doesn't have the unbeatable aura of a Georges St. Pierre.

2. Chad Mendes (7): At 10-0 and coming off a big win over Michihiro Omigawa, Mendes is absolutely worthy of being next in line for a featherweight title fight. Mendes will have a tough time standing with Aldo, who is a much better striker and has a big reach advantage, but Mendes is a great wrestler who could get on top of Aldo for 25 minutes and win a decision.

3. Hatsu Hioki (2): It's an unfortunate reality of MMA in Japan these days that Hioki, who owns championship belts in both Shooto and Sengoku, just doesn't have many interesting fights available to him. In the UFC, however, there would be a nearly never-ending supply of good fights for him to take. The sooner the UFC can sign Hioki, the better.

4. Manny Gamburyan (3): Gamburyan's fight with Tyson Griffin in June promises to be a lot of fun, and an example of something we're going to see a lot of in the months ahead: Former UFC lightweights dropping down to 145 pounds.

5. Michihiro Omigawa (4): After Omigawa struggled with Mendes, his job in the UFC could be on the line against Darren Elkins at UFC 131. Omigawa had a great run in Japan in 2009 and 2010; now he needs to show that he can beat an American wrestler.

7. Mark Hominick (NR): Hominick deserves all the credit in the world for the toughness he showed against Aldo, continuing not just to finish the fight after he was badly hurt, but to win the fifth round. Yes, Aldo was the better fighter, but Hominick gave Aldo a tougher fight than any of his eight previous Zuffa opponents had given him. Hominick showed he legitimately belongs in the Top 10.

8. Erik Koch (NR): Koch is 12-1, with the only loss coming against Mendes, and he's won the Knockout of the Night award in his last two fights. Koch, who has Cub Swanson at UFC 132 next, is rapidly becoming the kind of fighter fans love to watch.

9. Diego Nunes (9): The 16-1 Nunes is coming off his biggest win to date, against Mike Brown in January, and next he gets Florian in June. If he can beat Florian, he has to be considered a future title contender.

10. Dustin Poirier (8): UFC 131 may be the year's most significant card for the featherweight division: In addition to the aforementioned Florian-Nunes and Omigawa-Elkins fights, UFC 131 also features Poirier taking on Jason "Shotgun" Young. Poirier looked phenomenal in his featherweight debut against Josh Grispi at UFC 125, and at age 22 he may have the most exciting future of anyone at 145 pounds.