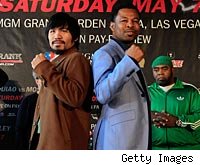 MMA Fighting has a Manny Pacquiao vs. Shane Mosley live blog for round-by-round updates for one of the top boxing fights of the year.

The main event will start a little after 11:30PM ET. Check out our Pacquiao vs. Mosley results page to find out what happened on the undercard.

Round 1: This fight is underway. Both fighters start cautiously and carefully, wanting to feel each other out before taking any chances. Mosley lands a good jab but Pacquiao answers with a hard counter and the crowd roars. Mosley connects with a hard right hand to the body. Pacquiao wants to close the distance but Mosley is doing a nice job controlling where the fight goes, and Mosley throws a hard right. Close first round that I give to Mosley, 10-9.

Round 2: Pacquiao lunges with a left to the body and Mosley avoids it and counters with a right. Pacquiao seems to be having a little trouble with Mosley's movement. Pacquiao unleashes a hard combination. Mosley with a good 1-2 to back Pacquiao up. Now Pacquiao answers with a combination. There was an accidental clash of heads and the ref warned both fighters to watch it. Pacquiao starting to move a little faster and get Mosley off balance. The crowd chants "Manny! Manny!" Good combination to end the round, which I give to Pacquiao, 10-9.

Round 3: Mosley connects with a right hand but Pacquiao keeps moving forward. Mosley ducks under a punch and throws to Pacquiao's body, then Pacquiao swings wildly with a hard left. Pacquiao charges straight forward and DOWN GOES MOSLEY! Pacquiao smells blood and is on the attack. Pacquiao is now swarming and Mosley just has to back away, clinch and try to survive the round. Pacquiao with a big left hand! Great round for Pacquiao, 10-8.

Round 4: Pacquiao comes right back out and goes straight ahead at Mosley again. Mosley falls down but it's a trip, not a knockdown. Mosley lands a hard right hand! Mosley's best punch of the night slows Pacquiao down. Pacquiao is OK but Mosley is showing he still has plenty of fight left in him. Now Pacquiao on the attack again. Mosley takes advantage of his superior reach, moves out of the way and lands a punch of his own. Mosley with a good combination, Pacquiao counters. A very close fourth round that I give to Mosley, 10-9.

Round 5: Pacquiao lands a good hook with his right hand. Pacquiao now lands a good straight left. Pacquiao with a great 1-2 and Mosley can do nothing but back away. Mosley connects with a left hook, but this has been a good round for Pacquiao, 10-9.

Round 6: Hard exchange of punches in the center of the ring early in the sixth round. Pacquiao connects with an uppercut and Mosley is starting to look like he's getting worn down by Pacquiao's volume of punches. Mosley is slowing things down and clinching with Pacquiao, causing the fans to boo. Then Pacquiao separates from Mosley and goes on the attack, causing the fans to cheer. Mosley lands a good right hand but the round goes to Pacquiao, 10-9.

Round 7: Mosley gets through with a jab but Pacquiao is throwing far more punches and the difference in this fight is that Pacquiao is throwing three punches for every one from Mosley. We're starting to see some swelling around Mosley's right cheekbone, caused by Pacquiao's left hand. Pacquiao with a 1-2 and a good left hand. Now a great three-punch combination from Pacquiao, who is taking control of this fight. Pacquiao, 10-9.

Round 8: The fans are starting to boo as the pace is slowing down a bit. Pacquiao now throws a hard combination that backs Mosley up, and Mosley just isn't even fighting -- he's just avoiding Pacquiao without unleashing any offense of his own. Pacquiao is not quite as ferocious a fighter tonight as we've grown accustomed to seeing over the last few years, but Mosley is simply playing defense. Another round for Pacquiao, 10-9.

Round 9: At this point Mosley seems like he's growing increasingly hesitant to attack, and Pacquiao looks like he's going to cruise to victory. Mosley lands a 1-2 but Pacquiao is really the one controlling the pace of the fight. Pacquiao comes forward with a burst of punches, with solid lefts hurting Mosley. Even when Mosley lands a punch he doesn't seem to have much on it and Pacquiao is just shaking it off and coming right back. A big left hand from Pacquiao snaps Mosley's head back. Good round for Pacquiao, 10-9.

Round 10: Pacquiao lands a right hook. Pacquiao charges forward with a combination, then there's a clash of heads. Pacquiao is continuing to land hard shots and all of a sudden DOWN GOES PACQUIAO! Wow! That looked like a slip, not a knockdown, to me, but the ref ruled it a knockdown. Pacquiao now goes on the attack and has Mosley backing away. Replays clearly show that Mosley stepped on Pacquiao's foot and pushed him, and that shouldn't have been ruled a knockdown. So I'm giving the round to Pacquiao, 10-9, even though the ref gave Mosley a knockdown.

Round 11: Now Pacquiao is going for the kill. He wants to knock Mosley out. Mosley is offering almost nothing as the fans are chanting "Knock him out! Knock him out!" Pacquiao is doing his best to give the fans what they want. A hard exchange that includes a counter right from Mosley, a rare piece of offense from him. Pacquiao goes back on the attack with a left to the body. An easy round for Pacquiao, 10-9.

Round 12: They hug in the center of the ring to start the final round. The fans are chanting "Manny! Manny!" Pacquiao is doing his best to knock Mosley out, but Mosley is tying him up, backing away and otherwise going into retreat. Pacquiao lands a hard left. Mosley's face is badly swollen, and he's just going to try to survive the final minute. Pacquiao dominates the round but can't put Mosley down. I give it to Pacquiao, 10-9, and this fight is over.

The judges' decision will be announced in just a minute.