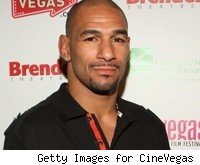 The fight easily could have gone to Hawn, and one judge said it should have, scoring it 29-28 for Hawn. The other two judges scored it 29-28 for Hieron, who credited his training for getting him into the kind of shape he needed to be in to win three fights in Bellator's eight-man welterweight tournament.

"I just train my butt off, man," Hieron said. "No matter what's going on, I'm in the gym sweating."

Hieron improved his record to 22-4 and is now on a 10-fight winning streak. The previously undefeated Hawn falls to 11-1.

Hieron is now the No. 1 contender for Ben Askren's Bellator welterweight championship, and Hieron called out Askren in the cage after the fight.

Saturday night's other Bellator fights on MTV2 all had exciting finishes: Bryan Baker dropped Joe Riggs with a brutal left hand to the chin to win a second-round TKO. David Rickels submitted Richard Bouphanouvong with a second-round triangle choke. Chase Beebe submitted Jose Vega with a guillotine in the first round, and Ron Sparks submitted Vince Lucero with a keylock in the first round.

The question for Bellator, as always, is whether putting good fighters like Hieron and Hawn in the cage was enough to attract attention beyond a small number of hard-core MMA fans. On a night when Manny Pacquiao vs. Shane Mosley is the top attraction for fight fans, it's hard for Bellator to draw viewers with Jay Hieron vs. Rick Hawn.