Unless Bout with St. Pierre Materializes Soon, Diaz Will Box Lacy in the Fall 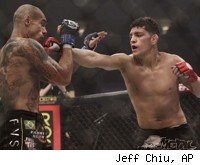 Boxer Jeff Lacy has signed a contract to square off against Strikeforce welterweight champion Nick Diaz in the boxing ring this fall, but Diaz's participation could be dependent on what Zuffa, the parent company of the UFC, decides to do about his immediate future in MMA.

While boxing promoter Don Chargin told MMA Fighting on Friday that both Diaz and Lacy have signed bout agreements to face one another in a boxing match later this year, Diaz's manager, Cesar Gracie, said Diaz has a contract with Chargin, but has yet to sign a specific bout agreement for this fight.

"Nick has a signed contract but is waiting to sign an actual bout agreement," Gracie wrote in a text message on Friday afternoon. "We are only waiting to see if Zuffa is serious about a Diaz-GSP fight."

"They have [signed a bout agreement,]" he told MMA Fighting. "They can say whatever they want, but we're going to a lot of trouble if we don't have it signed."

Diaz is currently under contract with Strikeforce, which is now owned by Zuffa, but the contract he signed before the Zuffa purchase has a clause that allows him to box outside the MMA organization. When asked whether a Diaz-GSP fight would be feasible under the current contractual situation, UFC president Dana White didn't rule it out.

"I imagine I could do whatever I wanted to do if I really wanted," White said following UFC 129 in Toronto. "But we have a contract with Showtime, and he's a Strikeforce fighter. We'll see how it works out, but that's an interesting fight."

White said he would be sitting down to talk with Diaz about his future plans, but he may not be the only promoter with that idea in mind. Chargin also said he'd be making the trip to see Diaz "in the next couple weeks" and would bring a couple of boxers with him to serve as sparring partners in a closed-door session.

"I've watched him already. I'm not worried about his boxing skills," Chargin said. "I just want to test him with some good fighters. They're both going to be main event fighters."

The former IBF super-middleweight champ Lacy last fought in December of 2010, when he lost a unanimous decision to Dhafir Smith in St. Petersburg, Fla. Before that he suffered a defeat via corner stoppage against Roy Jones Jr. in a NABO light heavyweight title fight in August of 2009.

Diaz last fought in April when he successfully defended his Strikeforce welterweight title against Paul Daley with a first-round TKO. It was his tenth consecutive victory, but afterward he again expressed displeasure with his pay and schedule as an MMA fighter, telling Inside MMA, "I don't see much of a future in this sport for me. I honestly don't, especially if there's not a whole sh--load of money going on."

Diaz has spoken openly of a move to boxing for the sake of more lucrative paydays, but Chargin said there are as of yet no details on where, when, or at what weight a Diaz-Lacy bout would take place.

For their part, Diaz's camp seems to be waiting to see what Zuffa will decide to do with St. Pierre before making any further commitments on a boxing match with Lacy. When asked when they expected to get an answer from the UFC brass on a potential Diaz-GSP fight, Gracie replied, "Hopefully next week."