Pacquiao vs. Mosley: Why MMA Fans Should Care 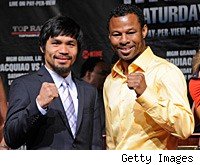 We'll have full results and live round-by-round scoring for Manny Pacquiao vs. Shane Mosley on Saturday night, which may lead to a few readers wondering, What's boxing news doing on an MMA site? Here are five reasons why you, if you're an MMA fan, should care about Pacquiao vs. Mosley:

1. It's the biggest combat sports event of the year.
For as much as the UFC has gained on -- and in some respects surpassed -- the popularity of boxing, the biggest fights in boxing still exceed the biggest fights in the UFC in terms of pay-per-view buys and worldwide media attention. Although the MGM Grand in Las Vegas obviously won't attract nearly as many fans as the 55,000 who came out to see Georges St. Pierre in Toronto, Pacquiao vs. Mosley will surely get more pay-per-view buys in the United States, far more mainstream media attention and far more attention globally, as Pacquiao is a draw throughout Asia and the single biggest celebrity in the Philippines, a country of nearly 100 million people. This is a major worldwide sporting event.


More: Pacquiao vs. Mosley Results | Crash Course | Pacquiao Ready
2. Pacquiao is the best fighter in the world, in any fight sport.
I love watching Anderson Silva and Georges St. Pierre just like all MMA fans do, but right now, the best fighter in the world fights in the ring, not the Octagon. Pacquiao's dominance over the last five years has been nothing short of extraordinary, especially considering the way he has moved up in weight class in pursuit of better opponents. Pacquiao is a man who first fought professionally at 106 pounds and first won a world title at 121 pounds. But he most recently beat the 150-pound Antonio Margarito and is now taking on Mosley, a former world champion at 154 pounds. Pacquiao is the best it gets in combat sports.

3. Pacquiao's fighting style is widely respected in the MMA community.
"I think Manny Pacquiao is boxing right now," UFC President Dana White said last year. The thing I love about him is when you start hitting him, he starts firing back. He doesn't budge. I love Manny Pacquiao."

B.J. Penn said after beating Diego Sanchez in a lightweight title fight that he was honored to be compared to Pacquiao: "I just like watching Pacquiao, how he throws punches in bunches. He's fast, you might get away from the first two or three, but the two or three after that are going to hit you."

Said Randy Couture of Pacquiao, "He's a handful for anybody right now. He's at the top of his game."

4. It's a good chance to see how a different way to handle the TV production of a big fight, and may provide some insight into where MMA fits into the Showtime Sports landscape.
The Pacquiao-Mosley fight is being distributed by Showtime pay-per-view, and it will look and sound just a little bit different than what you've seen with Showtime's MMA coverage or the UFC's broadcasts. The production qualities on Showtime boxing events are usually first-rate, and it's interesting to see how everything from blow-by-blow to color commentary to instant replays to graphics to pre-fight and post-fight interviews are handled.

Showtime occupies a strange place in the mixed martial arts world: It's the only premium cable outlet for MMA, but no one seems to know what its future in MMA holds now that the UFC has purchased Strikeforce. If Showtime Sports takes some time during Pacquiao vs. Mosley to promote Strikeforce and the upcoming Alistair Overeem vs. Fabricio Werdum fight, that's a sign that Showtime is serious about having MMA in its future. If MMA never gets a mention, that's a sign that Showtime doesn't view MMA as worthy of being promotion on its biggest platform.

5. It promises to be a lot of fun.
Let's face it: If you're an MMA fan, boxing can seem kind of boring. Boxing is by its very nature a more limited sport than MMA, and the combination of shorter rounds and longer fights makes it easy for MMA fans to wish the fight would just end already.

You won't feel that way watching Pacquiao and Mosley. Say what you will about boxing as a whole, but no one has ever accused either of these two fighters of being boring. Pacquiao vs. Mosley is guaranteed fireworks. Join us here Saturday night and we'll have it all covered.