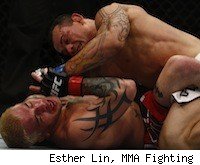 Ultimate Fighter season 12 contestant Cody McKenzie has been forced out of his UFC 130 fight with an injury, and Brazilian Gleison Tibau is likely to step in and replace him in facing veteran Bart Palaszewski.

The UFC confirmed that Tibau has verbally agreed to the bout.

McKenzie (12-1) has split his two fights in the UFC octagon, winning his debut with his trademark guillotine choke variation before dropping his most recent fight in a technical submission to Yves Edwards.

The change results in a much more experienced opponent for Palaszewski, who will be making his UFC debut after winning three of his last four in the WEC's lightweight division. In his last bout, Palaszewski (35-14) lost a tight split-decision to Kamal Shalorus.

Tibau (22-7) is one of the division's biggest competitors, cutting around 30 pounds during fight week.

It will be a fairly quick turnaround for Tibau, who defeated Kurt Pellegrino by split decision during the March UFC 128 event in New Jersey. Overall, he's won three of his last four, losing only a unanimous decision to the streaking Jim Miller.

UFC 130 takes place on May 28 at the MGM Grand Garden Arena in Las Vegas and will be headlined by what is likely to be the last fight of the Frankie Edgar vs. Gray Maynard trilogy.