UFC: No Local Octagon Girls Have Been Hired for Rio Event 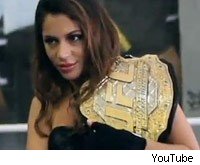 MMA Web sites were buzzing earlier this week when word broke that Brazilian model Maria Melilo would serve as a guest Octagon Girl at UFC 134 in Rio de Janiero, Brazil. The news was first reported by Brazilian outlet Terra.com.

However, according to a UFC official, there is "no truth to this report."

Sorry to be the bearer of bad news.

Ever since the UFC announced its return to Brazil late last year, rumors have circulated that the promotion would hire a local guest Octagon Girl to work the event, and while that still may be the case, the UFC official said that no plans have been made either way just yet.

Melilo appears to be somewhat connected to the Brazilian MMA world, as you can see in the photo shoot below.

But for now, you'll have to settle on Arianny, Chandella and Brittney to get your Octagon Girl fix. Speaking of which, remember when we went to the beach and zoo with the Girls in Sydney?