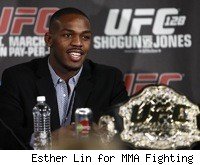 Lineal champions have always interested me for one reason or another, and with talk intensifying of Strikeforce champions facing UFC champions in the near future, I thought it would be interesting to see where the WEC and PRIDE titles have ended up, considering those are the two biggest organizations Zuffa purchased over the years. No disrespect to the EliteXC or the IFLs of the world, but that would just get too confusing.

So check out the state of the WEC and PRIDE titles below. Dare I say more titles than you think have been unified.

Last champion: Ron Waterman. (Title was abolished after Zuffa purchased WEC in 2006. None of the major promotions hold fights at super heavyweight, so we'll just leave things at that.)

Last champion Brian Olsen -- Technically still the champion since he hasn't lost since winning the title in 2006. He also hasn't fought since 2008.

The last PRIDE heavyweight champion was Fedor Emelianenko, who then lost to Fabricio Werdum in Strikeforce in June 2010. Werdum faces Alistair Overeem on June 18. If Overeem wins, he can unify the PRIDE, Strikeforce and DREAM interim heavyweight title.

Jon Jones unified the UFC and WEC titles when he beat Shogun Rua at UFC 128.

This is a tricky one. If you consider Paulo Filho vs. Chael Sonnen II to be a non-title fight, which it officially was, then Marcos Rogerio de Lima, who beat Filho in Oct. 2010 is the current champ. However, if you consider Sonnen the last-ever WEC champ due to the fact that he beat Filho in a bizarre non-title fight after Filho missed weight, then Anderson Silva unified the title at UFC 117 when he submitted Sonnen. (Note: Filho's camp sent Sonnen the title after their rematch even though it was officially a non-title fight.)

PRIDE's 185-pound division was known as their welterweight division. The UFC and PRIDE middleweight titles were unified at UFC 82 when Anderson Silva (UFC champion) defeated Dan Henderson (PRIDE champion). So Silva unified the UFC, PRIDE and WEC title when he beat Chael Sonnen at UFC 117.

PRIDE did not have a 170-pound title-holder.

The last WEC lightweight champion was Anthony Pettis. He will make his UFC debut on June 4 against Clay Guida and has been promised a UFC title shot if he wins.

So when Aoki defeated Kawajiri at DREAM.15, he unified the DREAM and PRIDE titles. Aoki lost to current Strikeforce lightweight champion Gilbert Melendez in April 2010 but that loss took place before DREAM.15.

The last WEC featherweight champion was Jose Aldo, who successfully defended the new UFC featherweight title when he beat Mark Hominick via unanimous decision at UFC 129.

The last WEC bantamweight champion was Dominick Cruz, who is scheduled to defend the new UFC bantamweight title for the first time against Urijah Faber at UFC 132.

The good news is that all the lineal champions mentioned are under the Zuffa umbrella, so that means we may soon be able to truly answer the aged old question of who is No. 1 in every major weight class.