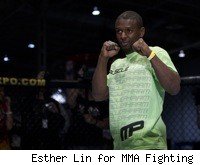 Yves Jabouin's days of fighting at 145 pounds may soon be coming to an end.

Following Jabouin's third loss in his last four fights at UFC 129, his head trainer Firas Zahabi said on Monday's episode of The MMA Hour that it could be time for the exciting featherweight to consider moving down a weight class.

"I'm going to consider dropping him to 135," Zahabi said. "That's something I've talked to him about, and he could make 135 easily, I believe. He just doesn't like cutting weight.

"You could see the great size difference between him and his opponent, and I'm a big believer in not giving away any advantages. I felt he gave away the size advantage, that's why Garza was able to get some knees in and I think Yves' striking is far beyond his opponent Pablo Garza. Garza is more of a jiu-jitsu specialist, but he is bigger and taller and had a weight advantage, so he was able to work his game.

"But I really believe Yves also has to go more to the drawing board and work more on jiu-jitsu and make some extra time for his jiu-jitsu."


Jabouin dominated Pablo Garza in the opening minutes of their fight on Saturday night with his speed and leg kicks. Unfortunately for him, Garza's superior height and BJJ skills helped "The Scarecrow" pull off an impressive flying triangle choke with seconds remaining in the first round.