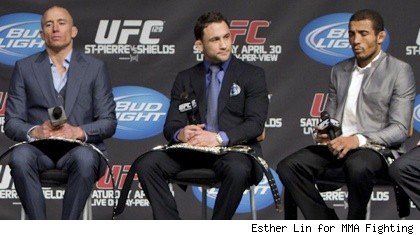 Heading into UFC 129, I thought both welterweight champion Georges St. Pierre and featherweight champion Jose Aldo had a good chance of putting on the kind of performance that would move them up in the pound-for-pound rankings.

GSP did what he usually does and won a dominant unanimous decision over a good opponent in Jake Shields, but he didn't do anything that makes him leapfrog Anderson Silva at the top of the list. And Aldo won a classic battle with Mark Hominick, but it wasn't the kind of transcendent performance that could put him on top of the MMA world.

So as we review the Top 10 pound-for-pound fighters in mixed martial arts, there's no change at the top.

1. Anderson Silva (1): The middleweight champion remains at the top of the mixed martial arts world, heading into his August title defense against Yushin Okami in Rio. The first Silva-Okami fight ended in controversy, as Silva was getting the better of Okami standing up but was disqualified for a kick to the head on the ground. That was Silva's last loss; he's 14-0 since then.

2. Georges St. Pierre (2): The best argument for St. Pierre moving up to face Silva at middleweight is that St. Pierre simply isn't being challenged at 170 pounds. For 25 minutes against Shields, there was never even an instant in which I thought St. Pierre was in the slightest bit of trouble. I'd love to see how St. Pierre reacts when he feels threatened, and I don't think I'm going to see that unless St. Pierre takes a step up in weight class.

3. Jon Jones (3): A hand injury forced Jones to withdraw from a planned light heavyweight title defense against Rashad Evans, although the Evans fight could still happen by the end of the year. The big question facing the UFC is whether a long layoff could derail some of the momentum that the promotion's brightest young star had built.

4. Jose Aldo (4): Aldo is a great fighter who's only 24 years old and might hold the featherweight title for many years. But the Hominick fight demonstrated that he is beatable: After battering Hominick for four rounds, Aldo got put on his back and beaten up in the fifth. A good wrestler like Aldo's next opponent, Chad Mendes, might just give him some trouble.

5. Dominick Cruz (5): The UFC bantamweight champion, Cruz is 17-1 and will get a chance to avenge his only loss, to Urijah Faber, in July. One of the things that's been overlooked about the first Faber-Cruz fight, more than four years ago, is that Cruz was only 21 years old at the time. The 25-year-old Cruz has improved dramatically and is a much more complete fighter.

6. Frank Edgar (6): The long-awaited third fight between Edgar and Gray Maynard is now less than a month away. If it's as good as their fight in January, no one will come away disappointed.

7. Gray Maynard (7): I rank Edgar slightly ahead of Maynard because Edgar has the title belt and the two wins over B.J. Penn, but it's certainly legitimate to consider Maynard the top lightweight, considering that he beat Edgar in 2008 and nearly beat Edgar in the first round of their draw in January. It would be nice to see a decisive victory one way or the other in their third fight.

8. Cain Velasquez (8): The undefeated heavyweight champion of the world will, if all goes according to plan, face the Brock Lesnar-Junior dos Santos winner on October 8 in Houston. That would represent just under a year off for Velasquez, and MMA fans can only hope that he'll be healthy and ready to go after a long layoff.

9. Shogun Rua (NR): I was probably a little too hasty in dropping Shogun out of the Top 10 in my last rankings, after he lost to Jones. Light heavyweight is the UFC's toughest division, and although Shogun was dominated by Jones, he has established himself as No. 2 at 205 pounds. I expect Shogun to avenge his loss to Forrest Griffin in Rio in August.

10. Lyoto Machida (NR): Machida showed with his spectacular knockout of Randy Couture what an explosive athlete he is. Some fans still perceive Machida as a cautious fighter who's content to get away with winning a decision, but his record doesn't really back that up: Machida has won the UFC's Knockout of the Night award in three of his last six fights. Shogun may have his number, but Machida has earned his spot in the Top 10.