Evan Dunham Out, Rafael dos Anjos in Versus George Sotiropoulos at UFC 132 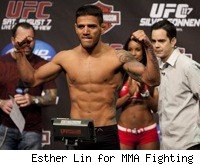 Evan Dunham will have to wait a little longer to snap his two-fight losing streak.

The lightweight was forced to pull out of his UFC 132 fight against George Sotiropoulos due to an undisclosed injury, MMA Junkie reported on Tuesday. UFC.com later reported that Rafael dos Anjos had agreed to replace Dunham and will face the Australian Sotiropoulos on the July 2 card.

"Really frustrated that I had to pull out," Dunham tweeted. "I was really looking forward to this fight. I will be back in there as soon as I am heeled (sic) up."

Dunham (11-2) has lost his last two fights in a row to Sean Sherk and Melvin Guillard.

Meanwhile, the 14-5 dos Anjos hasn't competed since suffering a jaw injury in his loss to Clay Guida last August. The submission loss to "The Carpenter" snapped a three-fight winning streak for the Brazilian.

Sotiropoulos (14-3) most recently lost to Dennis Siver via unanimous decision at UFC 127. The loss snapped an eight-fight winning streak for the 33-year-old.

UFC 132, headlined by Dominick Cruz vs. Urijah Faber for the UFC bantamweight title, takes place at the MGM Grand Garden Arena in Las Vegas. The main card will air live on pay-per-view.