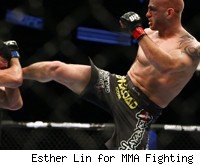 The event promoter, the company behind Canada's the Score sports television network, announced Wednesday the event as well as the the participation of Doerksen, Sokoudjou, Antonio Carvalho, Jordan Mein, Adrian Wooley, Jorge Britto, Josh Hill, Will Romero, Tyler Hardcastle, Denis Puric and Alex Ricci. Opponents are to be announced.

-- Doerksen (46-15) is a well-traveled MMA veteran on a three-fight skid off losses to C.B. Dollaway, Dan Miller and Hector Lombard.

-- Shooto veteran Carvalho (12-4), a former division top 10 fighter, came out of a two-year break from MMA in March 2010 and has won two fights for the Warrior-1 MMA promotion in Canada.

-- Mein (21-7) is a welterweight to keep an eye on, as this year alone, he's defeated Joe Riggs and Josh Burkman.

-- Another W-1 MMA competitor, Wooley (7-1), made his name fighting for the now defunct TKO promotion in Canada.

- Romero (5-2) was an entrant in Bellator's season two featherweight tournament, losing in the quarterfinal to eventual runner-up Patricio "Pitbull" Freire.

- Britto (12-7-1) recently had a four-fight win streak snapped by Jason Young, who just signed with the UFC.