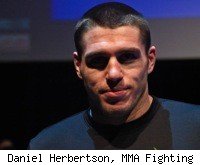 Former UFC middleweight Chris Camozzi will meet veteran Joey Villasenor in the main event of Shark Fights 15 on May 27, the promotion announced on Wednesday.

The event will mark Shark Fights' first outside the state of Texas, as it will take place at the Santa Anna Star Center in Albuquerque, N.M.

Camozzi (14-4) was recently released by the UFC after losing to Kyle Noke at UFC 127. Prior to the loss, the 24-year-old had won four fights in a row, which included two straight in the UFC.

The 35-year-old Villasenor (27-8) is stuck in a two-fight losing streak. He lost to Danillo Villefort at Shark Fights 13 after he was released by Strikeforce following his loss to Ronaldo "Jacare" Souza in May. The 12-year veteran has also fought for EliteXC, PRIDE, King of the Cage and DEEP.

No other fights have been announced for the card just yet.