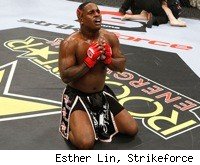 While not officially announced by the organization, the event is expected to take place on June 24 in Kent, Wash.

Larkin (10-0) looked great in his Strikeforce debut in April, defeating Scott Lighty via second-round TKO. "The Monsoon" has won ten straight fights since making his MMA debut in August 2009, and only two of those ten fights have gone the distance.

Villante (7-2) dropped his Strikeforce debut to Chad Griggs in February. A former collegiate football player at Hofstra University, the 25-year-old New Yorker held the Ring of Combat heavyweight title before signing with Strikeforce.

Also scheduled to fight on Strikeforce Challenegrs 16 is lightweight prospect Ryan Couture (2-0). His opponent has yet to be signed.