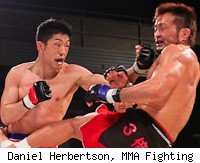 A lightweight tournament got underway and two crowns were up for grabs at Pancrase Impressive Tour 4 at the Differ Ariake in Tokyo Wednesday night.

With Maximo Blanco vacating his King of Pancrase title, Koji Oishi made it three for three against Daisuke Hanazawa, claiming the lightweight crown in the process.

In a rematch of their 2009 classic, Manabu Inoue again showed the heart of a champion as he hounded the hard-hitting Seiya Kawahara for three rounds to retain his bantamweight title.

Full results are after the break.

With Maximo Blanco vacating his lightweight Pancrase crown to pursue his career in the major leagues of MMA, who better to fill his spot than the only two men to not lose to him in the Pancrase ring. The bout was somewhat marred by fouls, headbutting and escaping through the ropes from Koji Oishi and a low blow from Daisuke Hanazawa, but a masterful display of strategy and body punching from the clinch from Oishi made up for it as he battled his way to a decision victory to crowned the fifth lightweight King of Pancrase. Hanazawa inability to complete takedowns against a superior wrestler and a lack of options on the feet led to the bout slipping away from him after a strong start.

For the second time, Manabu Inoue's tenacity won over Seiya Kawahara's raw power. In a rematch of their 2008 title fight, Inoue retained his bantamweight crown via majority decision thanks to his tireless takedowns and pressure. Kawahara's opportunity to unleash his formidable power never came as Inoue gave no room to strike through all three rounds, using kicks to set up his clinch and takedown on the feet and constantly pressing for the rear naked choke on the mat.

In a grueling three-round war, top-ranked welterweight Eiji Ishikawa nudged out a majority decision over Ichiro Kanai. Both men saw the bout swing in their favor multiple times but Ishikawa's control won out over Kanai's submission attempts and disregard for maintaining position.

Sengoku veteran and Masanori Kanehara teammate, Kazuki Tokudome. hammer-fisted, stomped and soccer kicked his way to an impressive decision victory over Hiroki Aoki. Kimura and armbar attempts from Aoki came close at times, but Tokudome finished each round strong with a torrent of punches and stomps. The win moves Tokudome into the second round of the Pancrase lightweight tournament this August.

In a upset, tenth-ranked Kota Okazawa crushed former lightweight King of Pancrase Katsuya Inoue with a left hook as Inoue looked to land a flying knee. Hammer-fists to the face to an unconscious Inoue sealed Okazawa's position in the second round of the Pancrase lightweight GP this August.

In a Pancrase lightweight tournament bout, Isao Kobayashi's determination to stay on top and Yukinari Tamura's complacency from the bottom led to the former taking a narrow split decision. The pair were inseparable on the feet but Kobayashi's takedowns and punches from in Tamura's guard gave him the edge he needed to advance to the second round of the tournament in August.

The evening's final lightweight tournament bout was called off when Nobuyuki Kotani was unable to make weight. His opponent, Tomoyoshi Iwamiya, advances to the second round without having to fight.

A lack of takedown offense combined with a lack of options from bottom is a clear recipe for losing in modern MMA. Second-ranked welterweight and former champion Kengo Ura presented few issues for "Strasser" Kiichi Kunimoto, getting taken down at will and finding it difficult to get back to his feet. A last minute guillotine attempt was the only redeeming point in an otherwise one-sided wrestling-centric bout.

Shintaro Ishiwatari looked to be cruising to a dominant victory for the first two rounds of his bout with second-ranked bantamweight Tashiro Nishiuchi. Ishiwatari's strategy of circling away from Nishiuchi and nailing him with jabs and rips to the body as Nishiuchi over-extended himself in an attempt to keep up was solid until a remarkable final round rally from Nishiuchi. With blood streaming from his open mouth, Nishiuchi finally managed to cut off the ring and find a home for his hands, pushing a valiant Ishiwatari to the brink of unconsciousness and earning a split draw.

Masahiro Toryu and Hiroki Nagaoka both bring into the ring a reputation for knocking opponents out in brutal fashion but when the two strikers met in the ring, caution took priority over offense and after three rounds of clinching, the judges were unable to separate them.

First-ranked Pancrase featherweight, Tomonari Kanomata, picked up another impressive win, winning in scrappy exchanges with Masakazu Takafuji before taking him down and powering his way to an Americana victory.

In the evening's opener, Valkyrie featherweight champ Mei Yamaguchi picked up her second win in as many months, making short work of Akiko Naito, outworking her on the feet before taking her down and submitting her with an armbar seconds after the bout hit the canvas.