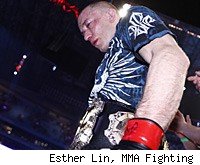 After his fighters went 4-1 on the biggest UFC card in history on Saturday, Firas Zahabi said his biggest star's left eye will be OK – and that a champion vs. champion fight may be in his future.

Zahabi, head trainer at the Tristar Gym in Montreal, home of UFC welterweight champion Georges St-Pierre, told Ariel Helwani on "The MMA Hour" on Monday that his star pupil's left eye, which St-Pierre said he could not see out of midway through the fight onward, was not a serious injury.


But more importantly, he shed a little light on what might be next for St-Pierre after his decision welterweight title win over Jake Shields in the UFC 129 main event in Toronto. Zahabi believes St-Pierre might get Strikeforce welterweight champion Nick Diaz.

"We haven't sat down to talk about (what's next)," Zahabi told Helwani. "I'm sure the UFC is going to want Nick Diaz. He deserves a shot. He's put on great performances and his last fight was extremely exciting."

Talk for a while has been that if St-Pierre beat Shields, he might move up to middleweight to challenge Anderson Silva. Silva next defends his title against Yushin Okami this fall in Rio de Janeiro. But Zahabi said not so fast on GSP moving up – though he wouldn't rule it out.

"If Georges went up (to 185) right now, he wouldn't have cleaned out the division because there's still Nick Diaz there," Zahabi said. "He's champion, so you can't say he doesn't deserve a shot. I can't confirm anything, but I see it as a possibility. They have two champions. It's always exciting to see two champions go at it. He has a great style. He has beautiful boxing, great jiu-jitsu, and it's very similar to his brother. It's not easy to fight a tall, lanky guy like that. And he's always very busy. It's a whole different style than Jake."

UFC president Dana White said in Toronto that despite Diaz's Strikeforce contract, which also has to do with Strikeforce's Showtime deal, the GSP-Diaz fight is one he could make if he wanted to. White also said he planned to go to Stockton, Calif., where Diaz lives, to talk through some possibilities with him. Zuffa, parent company of the UFC, purchased Strikeforce earlier this spring.

"He knocked Jake down in the fourth round, so I have to give that round to Georges," Zahabi said. "The first three, I gave to Georges. The last one was up for grabs, so I could see them giving that to Jake."

But Zahabi was quick to point out to critics of St-Pierre again not finishing an opponent that it's much tougher than it looks.

"How many guys finish Jake Shields?," Zahabi asked. "You're fighting such a high-caliber guy – the guy's won 15 fights in a row. Who else has won 15 in a row? The guys you're going to name are the pound-for-pound best. Believe me when I tell you, both guys were trying to finish the fight and both guys were firing on all cylinders. People thing these guys are cruising, nobody's cruising in there.

"People want to see something spectacular and something flashy. Sometimes it happens, sometimes it doesn't. These guys are well trained. It's not easy to put them in a compromised situation. You saw full well, Georges threw how many overhand rights – with too much on them, in my opinion? And that's because he was trying to knock him out."

Zahabi said doctors ruled out a torn retina in St-Pierre's left eye, and that he believes it will be recovered 100 percent within 10 days. Zahabi said despite video replays showing an open-handed strike by Shields may have been what caused the damage to St-Pierre's eye, he doesn't believe it was intentional.

"I don't think it was intentional," Zahabi said. "It happens in MMA because of the gloves. It just happens. I knew Georges would stick it out. He told me several times he couldn't see out of the left eye. But he's not going to give up."

Zahabi also picked up wins with John Makdessi, Ivan Menjivar and Rory MacDonald on Saturday night. His only loss was Yves Jabouin, who was submitted by Pablo Garza's Submission of the Night bonus flying triangle choke.

Zahabi now goes to work with former WEC bantamweight champion Miguel Torres for his fight against Demetrious Johnson at UFC 130 on May 28.