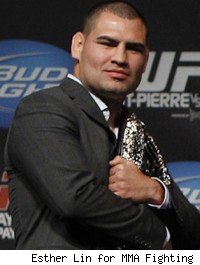 It's not easy for Cain Velasquez to attend fights. The UFC heavyweight champion, who has been on the shelf since his title win over Brock Lesnar last October, is itching to return to the cage.

"Every fight I've gone to I've been jealous so I can't wait to get in there," Velasquez said Monday on The MMA Hour, when asked about attending this past Saturday's packed UFC 129 event. "I'm hungry. This is what I love doing. This is my dream job, to work out for a living. To not be able to do it right now, it's kind of hard."

Though Velasquez says he doesn't know when exactly the torn rotator cuff occurred, the injury to his right shoulder happened during the fight against Lesnar and it wasn't until after the fight when he noticed something was off.

"That night when I layed down and try to get up." Velasquez recalled. "It was achey -- it just wasn't feeling right."

His doctor initially told him to take six weeks off, but when the problems persisted, Velasquez elected to undergo surgery earlier this year.

As of this past weekend, Velasquez (9-0) is probable for a title defense on Oct. 8 in Houston against the UFC 131 winner between Lesnar and Junior Dos Santos, according to UFC president Dana White. This is if, of course, Velasquez is on track with his recovery.

"I feel like I'm 90 or 95 percent right now," said Velasquez, who gave a safe estimate of two months until he's 100 percent again. "I'm supposed to see the doctor this week. I think the next process is strengthening the arm, but not going 100 percent. A lot of technique, a lot of foot work."

After, Velasquez could see himself facing the winner of the Strikeforce Grand Prix, but it's something he's not thinking too much about since his focus next will be either Lesnar or Dos Santos.

For professional athletes who are required to stay active for a living, time off can present issues from a mental standpoint. Velasquez says he's glad to have the support at home and from his fiance to remind him what's important now is to focus on getting healthy.