UFC 129 Morning After: The Unique Talent of Lyoto Machida 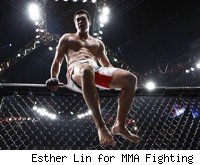 It's been said a million times that Lyoto Machida has a unique style in mixed martial arts, and that's certainly true. But Machida showed in his knockout victory over Randy Couture on UFC 129 that even more significant than a unique style is his unique talent: Machida can do things inside the Octagon that no one else can do.

Think for a moment about what it really means to say that Machida has a unique style: It doesn't mean that he's aware of some secret method of fighting; the style he employs is based on karate, which is studied by millions around the world. What it really means is that what he can do with karate is different from what all those other millions of karate students can do.

Machida is incredibly light on his feet, like a dancer. No, it doesn't sound like a compliment to compare a fighter to a dancer, and sometimes the way Machida's fleet-footedness manifests itself is in backpedaling inside the Octagon, a tactic that's been widely criticized. But when Machida's footwork manifests itself the way it did against Couture, it's a beautiful sight to behold. The jumping front switch kick that Machida employed to knock Couture out required a degree of speed, power and explosiveness that very, very few athletes possess. That's what makes Machida special.

When Machida beat Rashad Evans to win the UFC light heavyweight championship two years ago, he was praised a little bit too much: The declaration of the "Machida Era" before Machida had even defended his title looks silly in hindsight, and there was something of a fan backlash when Machida won a controversial decision against Shogun Rua, then lost the rematch to Rua and then lost to Rampage Jackson. It became easy to dismiss Machida as overrated.

But the truth is, Machida is a special athlete, and a special fighter. His victory over Couture re-establishes him near the top of the light heavyweight class, and he may soon earn a fight with another uniquely talented light heavyweight, Jon Jones.

"Deep breath, Georges," Jackson said as St. Pierre took a seat on his stool. "Settle down, my friend, settle down. Excellent job. Deep breaths. Calm down. Very good controlling the distance, very good disengage and re-engage. I need you to start attacking his jab. He's hiding behind that jab. Counter right hands, whatever you want to do. Second thing, set up your kicks."

It's easy to hear what Jackson says to St. Pierre and understand why that's the man St. Pierre wants in his corner.

-- It's going to be tough for the UFC to find a featherweight who can give Jose Aldo more of a challenge than Mark Hominick did, but Chad Mendes getting the next shot would make a lot of sense. The 10-0 Mendes would be the best wrestler Aldo has ever faced, and might be able to do to Aldo on the ground what Hominick did to him in the fifth round.

Quotes from UFC 129
"I was telling myself, as soon as I landed one knee or even half a knee he's going to start protecting, and that's what I was waiting for. Then when I got him, he started protecting, got his arm down, I had the whizzer to flying triangle. I was going to go for an arm bar but he ended up rolling and when he rolled I was just like, I'm going to keep it." -- Pablo Garza, explaining the chess match that was his flying triangle choke submission victory over Yves Jabouin. I love fighters who have a great game plan and can stick to it.

"If we sent him home looking like that, we should never be allowed to put on a fight again." -- UFC President Dana White, when asked whether Mark Hominick was sent to the hospital to have his badly swollen face checked out.

Good call
Although the Aldo-Hominick fight became hard to watch late in the fourth round as Aldo made a mess of Hominick's face, referee Big John McCarthy made the right decision in saying that if the cageside doctor was willing to keep the fight going, he wouldn't stop it. The doctor said Hominick could keep fighting, and Hominick showed in the fifth round that he did, indeed, have plenty of fight left in him. Credit McCarthy for giving Hominick that chance.

Bad call
UFC announcer Mike Goldberg suggested during the broadcast that Mark Bocek is the best Brazilian jiu jitsu practitioner in the lightweight division. No, he isn't. Joe Rogan quickly chimed in and noted that B.J. Penn and Shinya Aoki would argue with that. So would several other fighters, including Jim Miller, Kenny Florian and George Sotiropolous. Goldberg has a tendency to overstate the quality of the fighters in front of him at any given time, and he definitely did that in talking up Bocek.

Stock up
All five of the winners of the fights that were streamed live on Facebook looked great: Kudos to Pablo Garza, John Makdessi, Jason MacDonald, Ivan Menjivar and Claude Patrick on great fights. And kudos to the UFC for a great decision to stream all the preliminary bouts live on Facebook. Here's hoping that's a permanent decision going forward.

Stock Down
Nate Diaz has now been overpowered by stronger opponents in two consecutive fights. Diaz needs to leave the welterweight class and move back down to lightweight, where he won't be taking on bigger, more muscular fighters.

Final thought
As great as Machida's finishing kick was on Saturday night, it's bittersweet that the kick likely ended Couture's career. If the great Couture is done, all of us who love MMA should thank him for the memories.