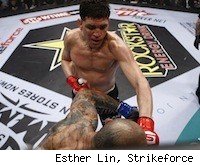 TORONTO -- Georges St. Pierre was barely a few minutes out of his last fight when the MMA world began speculating about what fight he would find himself in next. One thing is certain: the welterweight ranks keep thinning as GSP continues to mow through contenders. And since he's beaten several of the top-ranked UFC stars already, the UFC might well go to plan B.

Long discussed has been the possibility of a super fight with middleweight king Anderson Silva, but there are a few possible roadblocks. For one, St. Pierre hasn't committed to moving up a weight class. Also, he'd be forced to wait a few months, as Silva already has a scheduled title defense against Yushin Okami in late August.

The other alternative? How about a champion vs. champion bout with Strikeforce titleholder Nick Diaz?

"I'd like to see it," said just-vanquished Jake Shields, a teammate of DIaz's.

What say you, UFC president Dana White? Since Diaz is a Strikeforce fighter, and has the ability to box in his contract, could that fight even get made?

"I imagine I could do whatever I wanted to do if I really wanted," White said. "But we have a contract with Showtime, and he's a Strikeforce fighter. We'll see how it works out, but that's an interesting fight."

Later, when White was asked if St. Pierre had exhausted all his challenges at 170, White brought up Diaz again as a possibility.

St. PIerre improved to 22-2 with his five-round win over Shields in the main event of UFC 129, snapping Shields' 15-fight win streak in the process. St. Pierre did it despite injuring his eye around the second round. He said afterward that he couldn't see out of the eye for the rest of the fight. Because of it, he went to the hospital afterward.

While the Silva superfight has been talked for months now, White warned that the UFC has yet to approach either side about it, and given White's praise of Diaz, it seems he's just as strong a possibility. That would be just fine with Shields.

"I think he has a good shot," Shields said. "He has a style that matches up pretty good. His pressure boxing could cut him off and put pressure on him. We don't know what happens until we see it, so I'd like to see it."

"I'll tell you what, I was there for that last fight, and I was blown away by his last fight," White said. "He looked incredible. It's interesting."

In that bout, Diaz defeated Paul Daley via TKO. Afterward, he said he may leave MMA for boxing, but White said he will try to dissuade Diaz from doing that even though Diaz has a clause in his deal which allows him the option. The two met briefly during fight week, as Diaz was in town to corner both his brother Nate as well as Shields. White plans to soon fly to California and meet with Diaz in an effort to keep him in the fold. With Diaz looking for a big-money bout and St. Pierre possibly in need of an opponent, perhaps Diaz has leapfrogged Silva as the likely next man to face GSP.