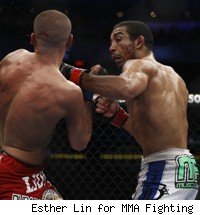 TORONTO – In the spirit of the biggest show in its history, UFC 129, the Ultimate Fighting Championship handed out record post-fight bonus awards on Saturday of, appropriately, $129,000 each.

Jose Aldo, Mark Hominick, Lyoto Machida and Pablo Garza were each given bonuses for their performances at Rogers Centre in Toronto. UFC president Dana White announced the winners and bonus amounts at the post-fight press conference after Saturday's pay-per-view – the first stadium show in company history in front of 55,724 fans, who accounted for a record $12.075 million gate in U.S. dollars.

Aldo and Hominick picked up Fight of the Night bonuses for their featherweight title co-main event. Aldo dominated the first four rounds, including a left elbow to Hominick's forehead that caused a massive swelling that had the packed house of mostly Hominick supporters groaning. But despite two looks from doctors, who allowed him to continue, Hominick mounted a fifth-round comeback that was almost one for the ages. He landed several big shots from the top on the ground that had him threatening to pull a late upset. But Aldo survived and won a unanimous decision, 48-45, 48-46, 49-46.

Hominick, an Ontario native fighting in his home province for the first time, said he hopes his wife, nearing birth of their daughter, wasn't put through too much stress. "I just want to say to my wife, 'I hope I didn't put you into labor. I know you're due any minute.' And second, I just want to thank John McCarthy for not stopping the fight. I was never going to give up."

Machida won Knockout of the Night for a jumping front kick to the face of Randy Couture that was reminiscent of the one middleweight champ Anderson Silva delivered against Vitor Belfort at UFC 126. The kick dropped Couture straight back instantly, and also knocked him out of his career with a loss. Couture reiterated after the fight his plan to retire.

And Garza won his second striaght UFC post-fight bonus, a Submission of the Night win over Yves Jabouin. Garza landed a slick flying triangle following a clinch, and after Jabouin defended it on the ground briefly, Garza tightened it up to force the tap. In his UFC debut at the TUF 13 Finale in December, Garza won Knockout of the Night for a flying knee against Fredson Paixao just 51 seconds into the fight.

UFC 129 was the company's first event in Toronto and its first stadium show. It sold 55,000 tickets for Rogers Centre – 42,000 to fan club members alone. The UFC built custom risers on the stadium's floor and brought in more than a dozen monitors. The 55,000 fans and gate in excess of $10 million both shattered the UFC's previous North American MMA records.

In the main event, welterweight champion Georges St-Pierre successfully defended his title for the sixth straight time with a unanimous decision over Jake Shields, 50-45, 48-47, 48-47.