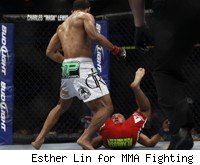 TORONTO – Following his first UFC featherweight title defense at UFC 129 on Saturday, Jose Aldo has his next likely opponent already lined up.

UFC president Dana White said at Saturday's post-fight press conference at Rogers Centre in Toronto that Aldo, who beat Mark Hominick by unanimous decision in the UFC 129 co-main event, will face Chad Mendes at UFC 133 in Philadelphia on Aug. 6.

"That's a curveball for me right now, (but) I think we're looking at Jose possibly fighting Philly," White said.

Aldo cruised through the first four rounds of the co-main event Saturday, including a big elbow to Hominick's forehead that caused a massive hematoma. Doctors twice checked the injury, including checking his eyesight, and he was allowed to continue. In the fifth round, though, Hominick turned the tables and had Aldo in the most trouble he's been in since his last loss in November 2005.

Aldo said he's not yet ready to think about who is next in line for his 145-pound belt.

"To me, I'm not sure if that's the fight or not," Aldo said. "I just want to take a week off and just think about it and rest my body. But I'm an employee, and whoever (Dana White) wants me to fight, that's who I've got to go and take out. So I'm prepared to fight whoever they put in front of me any time."

With the unanimous decision win over Hominick, Aldo improved to 19-1, including 8-0 in the WEC before his UFC debut Saturday. Aldo said Hominick was not necessarily more difficult than any of his previous opponents.

"Every one of my fights are difficult," Aldo said. "I respect all of my opponents and I prepare for all of my fights the same way. So I think this fight tonight just shows that I'm not only a guy that can knock people out quick, that I have the heart to go all five rounds and still hold on."

Mendes (10-0, 1-0 UFC) beat Michihiro Omigawa by unanimous decision at UFC 126 in February, putting himself in line for a title shot that now likely comes this summer. Before the UFC-WEC merger, Mendes, who trains at Urijah Faber's Team Alpha Male in Sacramento, went 4-0 in the WEC, all in 2010.

UFC 133, though not yet announced by the promotion, is expected to take place at the Wells Fargo Center in Philadelphia on Aug. 6. It will be the UFC's second trip to Pennsylvania in a six-week stretch following a UFC on Versus event in Pittsburgh on June 26. The UFC last was in Philadelphia for UFC 101 in August 2009.

Aside from the featherweight title fight, UFC 133 is expected to also feature light heavyweight bouts between Antonio Rogerio Nogueira-Rich Franklin and Phil Davis-Rashad Evans, plus a middleweight fight between Vitor Belfort and Yoshihiro Akiyama.