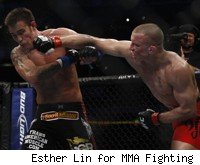 Georges St. Pierre won the decision over Jake Shields at UFC 129 in Toronto, but he also injured his eye and got showered with boos in his home country. Was it a Pyrrhic victory for the UFC welterweight champ, or just a sign that fans are too hard on the dominant St. Pierre? The answer depends on how you look at it.

I. GSP vs. Nick Diaz is now the biggest (only?) welterweight title fight the UFC can make. It's not that he's run out of credible challengers. Carlos Condit, for instance, could still be an interesting challenger. It's just that, after yet another disappointing decision, convincing fans to pay for the next GSP fight will be a challenge. A superfight with Anderson Silva would probably do it, but that's a ways off, if it happens at all. The champion-versus-champion nature of a GSP-Diaz is the only thing at 170 pounds that would sufficiently energize the mainstream fan base. With Diaz's style – not to mention his penchant for crazy talk before, during and after a fight – it's a fight that practically sells itself.

II. How serious is GSP's eye injury? And how serious does it need to be for MMA fans to care? St. Pierre tweeted that he still couldn't see out of his left eye after leaving the hospital, and it seemed to rattle him more than anything else we've seen him encounter in the cage. Eye injuries are no joke, but fans seemed willing to cut him very little slack for it. It didn't help that they'd just seen Mark Hominick fight through something that at least looked worse, but how bad does it need to get before fans will write off the ho-hum fight as a consequence of an unfortunate injury? Even tough guys have fragile corneas.

III. Like it or not, you can't argue the result. Even with one eye out of commission, GSP clearly won that fight. Even giving Shields two rounds on the scorecards seems generous, and of the people complaining about GSP's style, no one can dispute its effectiveness. It's a tough business when you have to win style points while also beating up the toughest men in the world.

IV. Jake Shields has been finished exactly once in his career. It happened in his third pro fight, a little over eleven years ago. Since then he's only dropped decisions, though he did survive a close shave after getting Dan Henderson's "H-Bomb" (hope you're happy Mauro Ranallo, now you've got me doing it) dropped on his head in the first round of their Strikeforce middleweight title fight. That's not to say Shields can't be put away, and it doesn't make Saturday night's fight any more fun to watch, but it is worth reminding ourselves that the guy can hang in there even under heavy pressure.

V. Of the 55,000 at the Rogers Centre in Toronto on Saturday night, how many went home feeling good about their purchase? You could definitely argue that they got their money's worth of action from the undercard, but crowds are like judges: they remember best what they saw last. UFC 129 drew a record crowd, but how many of the people booing St. Pierre and Shields will line up for tickets the next time the UFC comes to Toronto?

VI. Creating an exciting fight (or not) is rarely the responsible of only one combatant. If you're unhappy with the entertainment you got for your money on Saturday night, don't spare Shields his share of the blame. He had to know he was down on the scorecards in the final two rounds, but he didn't exactly go for broke. He got a little more aggressive. He talked a little tougher. But did he make up his mind to go out on his shield? Hardly. There's a reason the Fight of the Night bonus goes to both the winner and the loser. It works the other way too.

VII. How much does this decision criticism really count for in the long run? Granted, GSP has taken a lot of heat for going the distance lately, but consider Randy Couture, who gets treated like MMA royalty even after getting his teeth kicked out of his mouth. He'll be remembered as one of the all-time greats, but he won more fights via decision than by any other method. Some of his biggest wins – victories over Tim Sylvia and Tito Ortiz, for example – came by decision. Does anyone remember that now? If they do, they don't seem to care all that much. He's a legend for what he did, not just how he did it. Who's to say it won't be the same for GSP in twenty years?

VIII. Quick, name the last GSP fight that you'd actually like to sit down and watch again. Be honest. His last four fights were impressive displays of dominance, but I'd rather not spend the half-hour to relive any one of them. Like it or not, in a sport where you make money based primarily on how many people want to see you fight, that matters.