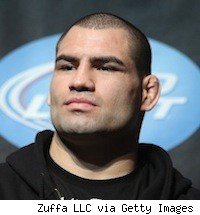 TORONTO -- UFC heavyweight champion Cain Velasquez is on track for an October return, and his comeback fight could come on Oct. 8 in Houston, UFC president Dana White said shortly after UFC 129.

Earlier this week, the promotion announced it would visit Houston in the fall with an event and a Fan Expo. On Saturday, White said the event could be targeted for Velasquez to defend his title.

"I don't know yet but probably," he said. "It sounds like that would make a lot of sense."

Velasquez has been on the shelf since defeating Brock Lesnar last October. He had shoulder surgery shortly thereafter and has been undergoing extensive physical therapy to get back into fighting shape Meanwhile, in June, Lesnar and Junior dos Santos will be fighting for the right to face Velasquez for the belt.

The October date is very tentative. It would require Velasquez to be cleared and ready to go, as well as the Lesnar-dos Santos winner to emerge from their UFC 131 fight relatively healthy, otherwise the date may have to be pushed back.

The 28-year-old Velasquez remains undefeated in his MMA career at 9-0 overall.

On Friday, Velasquez told fans at a question-and-answer session that he would eventually like the chance to fight the winner of the Strikeforce Grand Prix so MMA could have a true, undisputed champion.

"But right now, my focus is on studying Brock Lesnar and Junior dos Santos," he said.