Kid Yamamoto Out of UFC 130 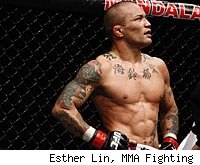 Looking to get in the win column in the UFC for the first time, Norifumi "Kid" Yamamoto will have to wait a while longer.

The Japanese legend made his UFC debut in February, losing a unanimous decision against Demetrious Johnson in a fight "Mighty Mouse" dominated with takedowns. Yamamoto was expected to face Chris Cariaso at UFC 130 next month, but the UFC reported Wednesday an injury has forced him off the card.

Stepping in to fight Cariaso in the bantamweight bout will be Michael McDonald on less than five weeks notice. The fight is expected to take place as part of UFC 130's preliminary card.

Yamamoto (18-4, 1 NC, 0-1 UFC), long considered one of the world's top featherweights, has lost three of his last four fights, including his drop to bantamweight in his long-awaited UFC debut and first fight in the United States in nearly eight years. The UFC did not disclose the nature of the injury.

McDonald (12-1, 1-0 UFC), the UFC's youngest fighter at 20, fought just one month ago at UFC Fight Night 24 in Seattle, winning a unanimous decision over Edwin Figueroa – and a Fight of the Night bonus in the process. It was his UFC debut after debuting in the WEC in November with a submission win over Clint Godfrey.

Cariaso (11-2, 1-0 UFC) went 1-1 in the WEC before moving to the UFC following the promotions' merger last fall. In his UFC debut in January, he won a unanimous decision against Will Campuzano at the Fight for the Troops 2 show at Fort Hood, Texas.

UFC 130 has seen several fight changes, most notably to the co-main event light heavyweight bout between Quinton "Rampage" Jackson and Thiago Silva. Silva's positive steroid test forced him off the card; he was replaced by Matt Hamill. Last week, Brad Pickett pulled out of his fight with former bantamweight champion Miguel Torres and was replaced by Johnson. Johnson's original opponent, Renan Barao, then got a new foe – Cole Escovedo.

UFC 130: Edgar vs. Maynard 3 takes place May 28 at the MGM Grand Garden Arena in Las Vegas, featuring a main event trilogy rematch between lightweight champion Frankie Edgar and Gray Maynard, who fought to a rare title bout draw at UFC 125 in January.