B.J. Penn: 'Teammates Have to Fight Each Other' 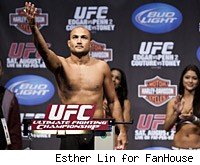 If you're a UFC fighter who's unhappy about being pressured into fighting your friends and teammates, don't come crying to B.J. Penn.

The former UFC welterweight and lightweight champion said on Monday's edition of The MMA Hour that it's all part of the game, and fighters should plan accordingly.

"I think teammates have to fight each other, and I knew that the whole time," Penn said. "That's why I would always distance myself. Of course they have to. I always thought it was B.S. that [Josh] Koscheck and [Jon] Fitch wouldn't have to fight, but they can just keep taking turns going for title shots, but they never had to fight each other? That doesn't make sense."

As Penn told Ariel Helwani on Monday's show, that's part of the reason why he chooses to do his training camps in Hawaii, far away from the more established gyms on the mainland where potential future opponents train.

"You know why I never went to any of these places and trained? Because it's the same thing that you see with guys like Rashad Evans and Jon Jones. Now there's a big problem because of that. That's why I always kept my distance from anyone. I had a thousand chances to go train with Jon Fitch, but I knew I'm probably going to fight this guy one day, so let's be friends when we're done fighting."

Of course, Penn's disdain wasn't limited to the teammates who refuse to fight each other. He also had some choice words for the fighters he suspects of using performance-enhancing substances, not that he's ever been shy about calling them out in public.

"I always complained about the steroids and stuff, but really I look back on it and I can beat all these guys even if they're on steroids," Penn said. "I just like to tease them. ...I would love to see more of the guys get busted, but there's really nothing you can do about that stuff, I guess."