For Jake Shields, Title Shot Against Georges St. Pierre Is a Family Affair 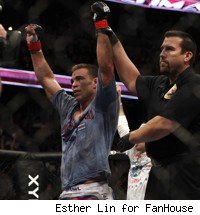 These days Jake Shields has a problem he's never dealt with before. For most of his career, he was one of the best, but least recognizable fighters in MMA.

Now, thanks to his title shot against Georges St. Pierre at UFC 129 on April 30 – and a significant promotional push from the UFC – his anonymity is a thing of the past.

"Sometimes just random people come up – and they're fans, you have to be nice to them and I completely appreciate my fans – but sometimes when you're just walking around you don't want to think about [the fight]," Shields told MMA Fighting. "Sometimes guys will come up and ask me how much I weigh or telling me how I should fight GSP. It's like, come on, man. Don't tell me how I should fight him. I have trainers for that."

Then again, every fighter has trainers. Shields also has something else that most don't: a manager who treats him like family. Because, well, he is.

Jack Shields coached his son in wrestling from the ages of nine to nineteen, but he was reluctant to get involved in Jake's MMA career at first.

"After the ['Mach'] Sakurai fight he didn't get any offers," Shields' father explained. "He upset Sakurai and then two months later he still wasn't in any fights. So he asked me to find him a fight."

The elder Shields had some experience representing bands and putting together the occasional music festival in the Sierra Nevada mountains, but he had never come close to managing a pro fighter before. Still, this was his son asking for his help, so he made some calls, offered the U.S. Shooto organization a few suggestions, and soon Jake had a fight.

"Jake asked me to manage him after that and I said, 'I'm sure there's someone down there who knows the business a lot better than I do. I'm all the way up here in the mountains. There's got to be someone closer to you who knows this business.' Six to eight months later he sent me a contract that somebody wanted him to sign and then I took over. It was terrible. I had to [delete] the whole thing and write a new one."
He's beat a lot of top fighters and yet he's never gotten a lot of attention.
-- Jack Shields
Shields' father has been calling the shots ever since, and both men have been pleased with the results. In that time Shields has gone from a champion on small regional promotions to a fighter on the national stage, though the goal was always to end up in the UFC, as Shields made clear when his Strikeforce contract came up for renewal in 2010.

"Unfortunately, Jake didn't play it as close to the vest as I would have liked," Jack said with a wry laugh. "We were in Strikeforce under a welterweight contract, and we were fighting middleweights because there wasn't any welterweight competition. After [Dan] Henderson, there wasn't really anyone left at middleweight. You couldn't see three fights ahead. You couldn't even see two fights ahead."

At the first opportunity, Shields made the jump to the UFC. Now comes the hard part, especially for a fighter who's gotten used to being ignored.

With the 'UFC Primetime' cameras in his face for the past few weeks, and his phone ringing constantly, Shields has had to adjust to the sudden heat of the spotlight on the fly.

"I try to stay focused, but it feels different because there's a lot more media attention and people coming up to me. It feels different in that way, but I keep my head on straight. Fighting for the UFC is amazing, and not a lot of people will get to do it, but winning a UFC title is a different story, especially against one of the best champs in the world right at his prime, and that's something I want to do. I feel like yeah, if I lost now I could always come back and win a UFC title. But it would mean so much more to take it from GSP right in his prime."

The way his father sees it, the strange part isn't the media attention that this fight is getting. With a crowd of 55,000 expected at the Rogers Centre in Toronto on April 30, a little extra buzz is to be expected. No, the strange part is that it took this long for his son to get the recognition he earned.

"It's been crazy, but Jake's been a top level fighter, in the top ten since 2004," Shields said. "He's beat a lot of top fighters and yet he's never gotten a lot of attention. This fight is getting more attention than any fight I can remember, and it's just gone off the hook. The enormity of this particular event is even bigger than we imagined."

[Jake's] confidence tends to wash over me, and I usually go into the fights relaxed and confident as well.
-- Jack Shields Fighting under that kind of pressure, and against one of the most dominant champs in MMA, is bound to be a little tougher than defending an EliteXC title in Sunrise, Florida. A fighter has to be on top of his game mentally, which is where Shields thinks previous challengers have gone wrong.

"I think a lot of guys go out there already beaten. They do it with a lot of the great champs. When they're at their peak and all these people tell you they can't be beat, you might start believing it. But for me, I've never felt that way. I've been a big underdog in several fights, but I always believe in myself and I'm going to go out there and fight."

And while most fathers would be overwhelmed by the stress of sitting outside the cage and watching their son fight for a world title – all under the contract they negotiated for him – the elder Shields said he draws his strength from his son's.

"Jake is somebody who fights cool. Before the fight he stays relaxed and he'll be back there joking. I've been back there with other people – I'm not going to name them, but friends of ours who fight – and some of them work themselves up to get mad and angry before they go fight. Jake doesn't do that. He's totally relaxed and totally confident. That relaxed confidence tends to wash over me, and I usually go into the fights relaxed and confident as well."

That's a good thing, because on fight night in Toronto there's likely to be a vocal mob of Canadians doing their best to unnerve the Shields family in every way they can think of. Staying relaxed and confident through all that will only be a fraction of the battle.