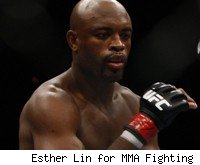 The UFC 134 fight card will feature Anderson Silva vs. Yushin Okami during the UFC's return to Brazil on Aug. 27 at the HSBC Arena in Rio de Janeiro.

Silva (28-4), who will be aiming for his ninth consecutive middleweight title defense, is facing the last opponent to have defeated him. Back in January 2006, Silva suffered a loss by disqualification for knocking out Okami with an illegal upkick. Okami (26-5) will enter his first UFC title bout coming off a victory over Nate Marquardt.

UFC: Rio marks the first time the promotion has held an event in Brazil since 1998. Check out the current lineup below.