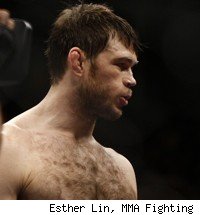 A rematch of the epic September 2007 matchup between Forrest Griffin and Mauricio "Shogun" Rua will take place at the UFC's upcoming event in Rio de Janeiro, Brazil, MMA Fighting has learned from sources with knowledge of the situation.

The original scrap between the two took place at UFC 76, with Griffin winning via third-round submission, pulling off the finish with just 15 seconds left in the bout. Griffin used the momentum of that win to propel him into a championship victory over Quinton "Rampage" Jackson in July 2008.

Griffin is coming off a UFC 126 unanimous decision win over Rich Franklin, which improved his record to 18-6.

Rua, meanwhile, is coming off his UFC title loss to Jon Jones at UFC 128.

UFC 134 will take place at HSBC Arena on August 27, and marks the first UFC event held in Brazil since 1998.

The main event will see long-reigning middleweight champion Anderson Silva attempting to defend his belt against Yushin Okami in another long-awaited rematch.