Brian Foster Out of UFC 129 Due to Brain Hemorrhage 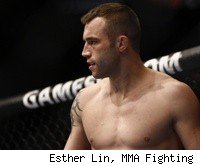 Welterweight Brian Foster has been forced out of his scheduled UFC 129 fight after a brain hemorrhage was detected in an MRI.

"I'm sorry to all my fans but I won't be fighting in Toronto," Foster wrote on Twitter. "My MRI came back and [I was told I] have a brain hemorrhage! I'm so sorry."

The 27-year-old was scheduled to face Sean Pierson on April 30 at the Rogers Centre, expected to be the largest event in the promotion's history.

According to MedicineNet.com, a brain hemorrhage is a type of stroke caused by a burst in a brain artery and head trauma is a common cause of bleeding in the brain. Treatment depends on the size of the hemorrhage and the amount of swelling.

The official UFC website is reporting that Pierson will receive a replacement opponent. As of Tuesday afternoon, Pierson tells MMAFighting.com he has not yet heard of any names.