Strikeforce: Diaz vs. Daley -- By the Odds 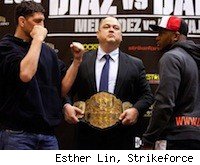 Strikeforce: Diaz vs. Daley goes down in San Diego on Saturday night, and while there are no odds on whether the organization's first big event following the Zuffa purchase will look or feel any different on Showtime, there are odds on just about everything else.

Let's take a look at how online oddsmakers see it going down and do a little armchair handicapping, shall we?

These are the odds I would expect in a simple 'puncher's chance' scenario, but I'm not sure Daley belongs in that category. At least, not in this fight. Diaz certainly has the better ground game, but it seems doubtful that he'll actually use it. Given his abhorrence of attempting takedowns, this seems like a fight that, at least for the first round or so, will be contested on the feet. Diaz typically starts slow, absorbs some punishment early, and eventually overwhelms opponents with the sheer volume of his punches and his utter refusal to take a step back or pause for a breather. As we saw when Daley fought Martin Kampmann, however, the Brit is extremely dangerous right out of the gates. It's up to Diaz to decide what kind of fight he wants this to be. Daley only knows one way to fight, but he needs an opponent who is either unable or unwilling to take him down in order to pull that off.
My pick: Daley. At these odds, and with the very good chance that Diaz can't possibly bring himself to back down from a challenge, it's worth the risk on the more one-dimensional fighter.

It's still hard to know exactly what to make of Kawajiri's claim that he didn't train in a cage for this fight, but if it's true it's definitely not a good sign. Melendez has become a more complete fighter since the first meeting, and we already know how at home he feels in the Strikeforce cage. Simply put, Kawajiri is out of his element, and facing an opponent who has more ways to win than he does. That doesn't mean a victory is out of the question, but the deck is stacked against him from the start.
My pick: Melendez. I expect it to go the distance, but I don't think the judges will have a hard time with it. Melendez proves his superiority more clearly in the rematch.

Jardine says he isn't worried about getting tired, though that sounds to me like something you say when you know you aren't in good enough shape to go three hard rounds. Even if Jardine had a full camp to prepare, Mousasi would still be quicker and more technically sound. Taking this bout on short notice makes it more likely that Jardine will feel like he needs to end it quickly, which in turn makes it more likely that he'll rush right into trouble. With his unconventional style and undeniable power, he could always surprise you, but I literally wouldn't bet on it.
My pick: Mousasi. It's his fight to lose, and he knows it. If he's smart he'll use his speed to tire out Jardine until "The Dean of Mean" becomes easy pickings. Then he can look for the finish.

Earlier this week Aoki said that the big thing he learned from his first foray inside an American MMA cage was to get here earlier to adjust to the jet lag. I hope he was joking, but it's hard to tell with that guy. Going to the ground with Aoki, which Beerbohm says he is perfectly willing to do, is a little like playing with poisonous snakes. You can be entirely sure that you know what you're doing, and it can still go badly for you. The worst part is, no one will have any sympathy for you afterward, since the risk was apparent to anyone with any sense. Beerbohm can believe that his submissions defense is up to par, but there's no way to know for sure until you get in there with a guy like Aoki. One mistake, and that's it. At the same time, if he can use the cage and exploit the weakness in Aoki's game, the fact that it's only a three-round fight will work in his favor.
My pick: Beerbohm. We know that Aoki is a monster when he's in the friendly confines of a Japanese ring, but in an American cage (with American refs and judges) he's yet to prove that he's anywhere near as dangerous. At these odds, that's enough to justify the risk.