Thiago Silva Suspended for One Year, Fined $33,750 By Nevada Commission 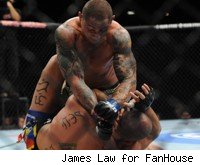 UFC light-heavyweight Thiago Silva has been suspended for one year and fined a total of $33,750 by the Nevada state athletic commission upon his admission that he used steroids and then provided a fake urine sample in order to pass a UFC 125 pre-fight drug test.

Silva's hearing before the commission took place on Thursday morning in Las Vegas, and he appeared without the benefit of an attorney, taking full blame for the incident and explaining how and why he did it.

According to MMAJunkie.com, Silva told the commission that he took a prescription steroid during the training camp for his Jan. 1 fight with Brandon Vera due to three injured discs in his back and then attempted to mask his usage by purchasing a fake urine sample online that is purported to beat drug screens.

Silva said the act was caused out of desperation to return to the cage, saying he needed to earn money to help support his family and dependents. Prior to UFC 125, the 28-year-old had not fought in over a year largely due to his injured back, and said he was "completely broke."

His ruse, however, was discovered when two of his samples proved "inconsistent with human urine" during testing.

In speaking with the commission, Silva admitted to turning his back to a commission inspector, opening the purchased sample, and pouring it into the test vial. According to MMA Junkie, the commission promised to reevaluate its methods for conducting tests to make sure a similar incident does not occur in the future.

Silva's license revocation will run to Jan. 2, 2012, and NSAC executive director Keith Kizer told MMA Fighting that Silva would not be able to reapply for a license until after he serves the full suspension. Silva originally made a total of $110,000 for the fight, including his win bonus. The total penalty of $33,750 represents just over 30 percent of his pay.

Meanwhile, the result of his fight with Vera -- originally a Silva unanimous decision -- has been officially changed to a no-contest. Vera, who was cut shortly after the fight, has since been brought back into the UFC fold.

Silva made no public comment to reporters upon leaving the hearing.