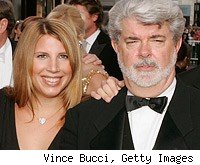 Amanda Lucas, the eldest daughter of Star Wars and Indiana Jones creator George Lucas, will make her return to the cage this Saturday at Freestyle Cage Fighting 46 in Shawnee, Okla.

Lucas, who has cameos in all three Star Wars prequels, holds a 1-1 professional MMA record and last competed in November 2009, earning a three-round unanimous decision over Christen Bedwell at FCF 37.

"Although I didn't fight in 2010 I was actively training, competing in grappling tournaments and earning my purple belt in Brazillian jiu-jitsu," Lucas tells MMAFighting.com. "The main reasons I didn't fight was first, I got married and I assured everyone that I wouldn't walk down the aisle looking like a battered woman. Second, I wanted to focus on getting technically better in all areas of MMA."

For this fight, Lucas, a purple belt under the high-decorated female grappler Lana Stefanac, trained Muay Thai with Ganyao Fairtex at Fairtex San Francisco, MMA with Gilbert Melendez's Skrap Pack team and occasionally at the Cesar Gracie Academy. Lucas is scheduled to meet Heather Martin of Jackson, Tenn. at 160 pounds.

"I am really excited for this fight," she said. "I was originally scheduled to fight in February, but I suffered a partially torn MCL and PCL during my training camp. I have basically been either training or rehabbing my knee for the past six months. I am looking forward to fighting, taking a week off, and then getting back into the gym. I am in great shape, well prepared and am ready to test myself on Saturday."