A hotly contested bout between one of the sport's best young stars in Mei "V.V Mei" Yamaguchi and fan-favorite "Windy" Tomomi Sunaba headlined Pancrase's first event since the devastating Tohoku earthquake and tsunami on March 11.

Like long-time rival promotion Shooto, Pancrase held a charity auction for victims of the Tohoku earthquake with many of the major gyms in Japan contributing items. But while Shooto limped into its promotional return on Friday with a half-length, scaled-down event, Pancrase stormed back into action with a full-scale, well attended event.

Mei "V.V Mei" Yamaguchi (formerly known as V Hajime) and "Windy" Tomomi Sunaba had a lot of pressure to perform in the first ever women's main event in Pancrase's 17-year history. They exceeded expectations though as the pair put on a thrilling fight-of-the-night performance.

Yamaguchi, the current Valkyrie featherweight champion, Shoot Boxing 2009 girl's s-cup runner-up, and Shoot Boxing 2010 Girl's s-cup semifinalist, was tireless in her attempts to takedown, control and pound Sunaba, and after a strong first round, looked to have "Windy's" number and the fight in the bag. Sunaba prevented the takedown and pushed off to strike in the second round though, causing considerable damage with knees to the face and hard straight punches against her shorter opponent. After two rounds the argument for a draw could be made but two judges saw fit to give Yamaguchi the nod.

37-year-old Takumi Nakayama pulled of an astounding come from behind victory against Yusuke "Bancho" Kawanago. In the first contact of the fight, Nakayama got caught cold and dropped by a stiff right hand, barely avoiding being stopped. A large mouse immediately formed under the eye of the veteran and should the doctor had a chance to look at it, it was likely that the fight be stopped. Nakayama did not afford the doctors that opportunity though and after a slick omoplata sweep, moved to Kawanago's back and finished the fight with a choke. 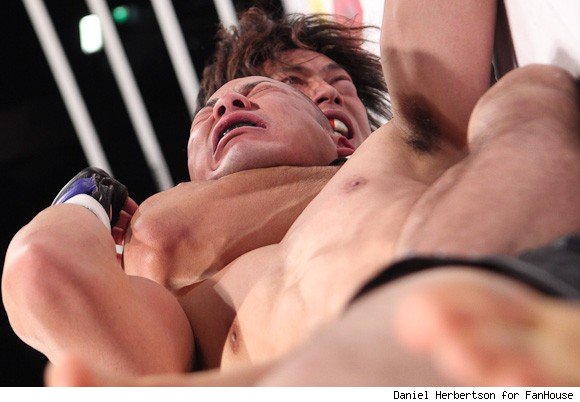 It was a scary scene when Shingo Suzuki absolutely brutalized Seiki Ryo. Suzuki caught a headbutt early from Ryo and after taking a moment to regain himself, blasted Ryo with a left hand that sent him to the canvas. A series of sickening punches added to the considerable damage and when the fight was finally stopped, Ryo was left stiff and wide-eyed but unconscious on the mat. It took a several long minutes for Ryo awake and when he did, he was intent on pulling guard on the team of doctors working on him. 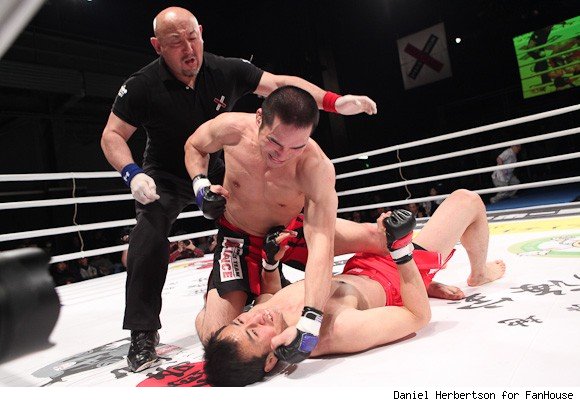 King of Pancrase Kiyotaka Shimizu successfully invaded Shooto on Friday night and former Shooto title contender Hiroyuki Abe scored one back for his promotion as he choked out Pancrase's Takuma Ishii after two thrilling rounds of grappling. Neither fighter was able to hold a position of dominance for more than a moment but when Abe secured the back in the second round, a moment was all he needed to secure the rear naked choke. 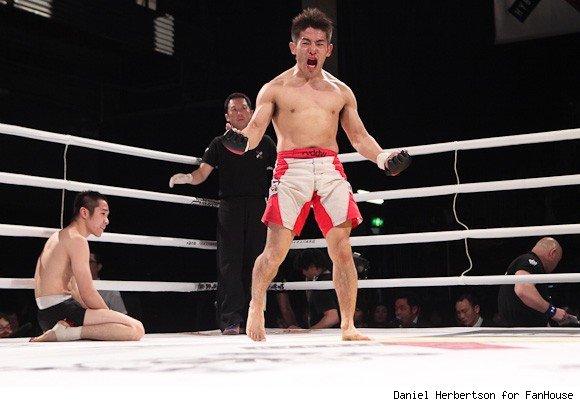 Kota Osakawa's gameplan was impressive in its simplicity against Juntaro Ami. Osakawa had no intention to spend any time on the feet, shooting for takedowns as soon as any opportunity presented itself and then on the mat, Osakawa was slow and methodical as he worked his way past guard into mount to finally rain in hard punches opening up the fight-finishing rear naked choke. 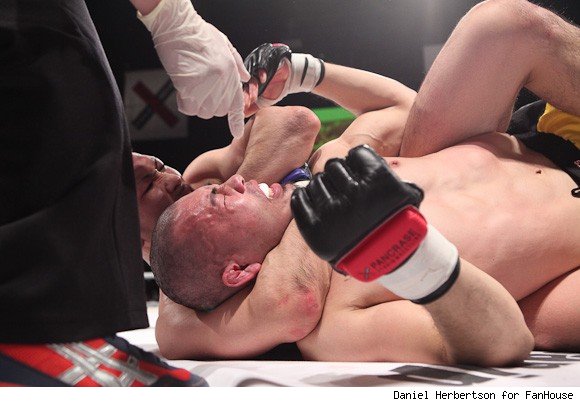 Masakazu Takafuji and Ichikawa "Randleman" presented an interesting problem for the judges but unfortunately the officials did not rise to the challenge. Ichikawa dominated the first round with a top-side crucifix and back control while Takafuji rallied in the second and final round to score a knockdown and then control the fight from mount. While both efforts were dominant, neither performance was good enough for a 10-8 however and although one judge scored it correctly with a 19-19, the other two ruled in favor of Takafuji, one turning in an incredible 10-7 card for the final round.

The 7-time All-Japan Wrestling Champion Akihito Tanaka only just managed to get past a solid test in AACC's Yusuke Masuda to continue to redeem his career following his disastrous debut against Bob Sapp. Masuda gave Tanaka all he could handle in the striking and wrestling departments and the two were clearly equals in terms of strength. It was in the latter half of the final round when Tanaka finally started to pull ahead, securing a takedown off a kimura attempt and controlling Masuda in head-arm control and back control until the final bell. Tanaka's final effort was only good enough to win two of the judge's favor. The third judge's vision may be questionable.

Sengoku veteran Tatsuya So and Ryota Sasaki got the evening under way with an entertaining two-round scrap that saw So strike and scramble his way to a close unanimous decision. The defining moment came in the final minute of the bout when So landed a head kick and straight right hand that sent a stream of blood down the forehead of his foe.