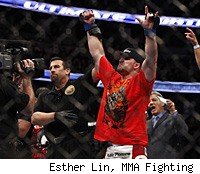 At long last, Matt Hamill finally is getting what he has been asking for for a while – and the UFC won't start him slowly.

Hamill (10-2, 9-2 UFC) has been asking for a Top 10 opponent, and UFC president Dana White said after his last win that he'd get one. After a series of changes, Hamill gets arguably the most important fight of his career at UFC 130 against former light heavyweight champion Quinton "Rampage" Jackson.

And thanks to five straight wins, Hamill, the only deaf fighter in the UFC, is riding high on confidence going into the May 28 fight.

"I know I'm going to break his will – I know I'm going to beat Rampage," Hamill told host Ariel Helwani on a recent edition of "The MMA Hour." "I've been training real hard and my conditioning and my skills and technique, striking and kicking are a lot better."

The road to the Top 10 opponent he's been seeking was an odd one, though.Hamill was originally scheduled to fight Phil Davis at UFC 129 later this month in Toronto. But he was moved into a slot against Rampage (31-8, 6-2 UFC) when Jackson's original opponent, Thiago Silva, was removed from the fight for a then-likely (and now confirmed and acknowledged by Silva) positive drug test following his UFC 125 win over Brandon Vera.


That set off a string of fight changes involving Davis, who got a new UFC 129 opponent only to switch cards to main event against Antonio Rogerio Nogueira when Tito Ortiz – Hamill's last win – pulled out.

Though Davis was not a Top 10 opponent for Hamill, he began to creep closer with his win over Nogueira last month. Hamill said he wasn't that impressed with Davis' unanimous decision win in Seattle. But he's got Rampage on his mind, and has since learning that would be his next fight.

"The first time I heard, I was really excited because I wanted to face him," Hamill said. "I think it's my moment and time to shine, so I'm really excited to fight Rampage."

Hamill, a standout on Season 3 of "The Ultimate Fighter" who was forced out of the semifinals with an injury, has lost only twice – to former middleweight champ Rich Franklin and by split decision to Season 3 TUF champion Michael Bisping in September 2007.

Most would argue, though, that he was on his way to a third defeat when he fought Jon Jones on the TUF 10 Finale. But Jones was disqualified for illegal "12-6" elbows – giving Hamill the controversial win and Jones, the newly crowned UFC light heavyweight champ, his only career loss.

Hamill said he knew after that fight Jones was the real deal – and he'd be glad for a rematch if it meant fighting for the title.

"I knew that Jon Jones was going to go way up to the top when I fought him," Hamill said. "I know he beat me ... I made a mistake when he took me down. From now on, it won't happen again. My goal is to get a title shot no matter who the opponent is. So it depends on how the UFC plays the cards."

A win over Rampage would get Hamill's summer off to a great start – also this year, "Hamill," a feature film based on his life overcoming the adversity of being the only deaf member of his family to become an elite-level collegiate and Deaflympics wrestler, then MMA standout, will open up. It has already played to festivals and preview audiences to good reviews.

Hamill said one of the most emotional parts of the film for him is the depiction of his relationship with his late grandfather.

"It's very touching – it puts death in perspective," Hamill said. "I had so many years of people making fun of me. But I learned from my grandfather, and he taught me about respect and honor and pride ... without my grandfather, I wouldn't be in the UFC. But I'm on the way to the top."