The Truth About Fighting Your Friends 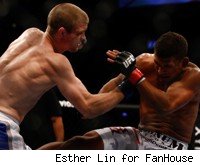 If UFC president Dana White has said it once, he's said it a thousand times: MMA is not a team sport.

It's a sport that's all about individual success and failure. It's about two men locked in a violent struggle for money and status, and there's not enough of either to go around.

This, of course, is the inexorable logic of the fight promoter, who stands to profit handsomely if he can convince friends, teammates, and training partners to forego all other loyalties and duke it out in the cage. But then, the promoter doesn't have to actually get in there and knock his best friend unconscious.

As UFC heavyweight Brendan Schaub put it, "This isn't basketball. It's not like Magic [Johnson] and [Larry] Bird playing each other and being all buddy-buddy. Somebody's getting fu**ed up."

To some, it seems like an easy call to make. If you're in this sport to be the champion – and if you're in it for any other reason, you've chosen the wrong line of work – then you ought to be willing to fight whoever stands in your way. As White has explained on multiple occasions, fighters have a limited window in which to earn as much money and prestige as possible, and while friendship is nice, it's not going to pay your bills.

The trouble is, while it's the individual who does the work on fight night, it's the coaches and training partners who make success possible. MMA may not be a team sport, but it's also not something you can do by yourself.

"When you go into your gym, you want to feel safe," said UFC featherweight Leonard Garcia. "You want to feel like, everything that I show these guys is so that I can help them get better. If I show them a move, I don't want to be worried that they can learn to counter it if we fight some day."

Greg Jackson's MMA in Albuquerque, New Mexico – where Garcia has trained for years – is known for its prohibition against teammate-on-teammate bouts. But after longstanding team member Rashad Evans and relative new addition Jon Jones agreed to fight for the UFC light heavyweight title recently, it caused a stir among what's long been regarded as one of MMA's most tight-knit and consistently successful gyms.

Part of the reason for that success, Garcia said, was that the fighters there felt comfortable enough to help each other improve as much as possible in training -- what Jackson calls a "cooperative, competitive dynamic." In order to get good training, you need good sparring partners giving you their best every day. And in order for them to do that, they need to know you won't use their own tricks against them some day.

Only now that the line's been crossed at Jackson's MMA, Garcia said, it's hard to predict how it might affect the gym atmosphere.

"I don't care what anyone says, if you think there's a chance you might fight a guy somewhere down the road, you hold back," said Garcia. "That's something we never had at our gym. Nobody held back. I'm interested to see how guys react to each other now after this big announcement. I'd hate for it to tear the gym apart, and I don't think that it should, but there's that possibility."

But there are teammates who have managed to meet in the Octagon without the walls of their gym crashing down around them. Take Evan Dunham and Tyson Griffin, for example. The two lightweights were sparring partners at Randy Couture's Xtreme Couture gym in Las Vegas when they got offered a fight against one another at UFC 115 last June.

Dunham, who was the newer of the two team members, said he immediately called up Griffin to ask him his thoughts on the situation before accepting the bout.

Of course, as soon as he took the fight Dunham realized there was an obvious problem. They couldn't both continue to train at the same gym – not without it getting incredibly uncomfortable and impractical, anyway. But since Dunham was the new kid on the mats, he knew what he had to do.

"I'd been at Randy's for three or four fights at that point, but I knew Tyson had been there a lot longer than I had. In my book, seniority rules in that aspect. It wasn't easy for me to step away because I knew that Randy's was where I'd be able to prepare for Tyson the best, but at the same time I realized that we both couldn't train there. Me being the newer guy, I felt it was right for me to step away."

Dunham would go on to win the fight via split decision, but he and Griffin both resumed training side by side afterwards. While he admitted it was "a little bit weird" to be back training with the guy he'd just fought, in the long run, Dunham said, it wasn't so bad.

"Actually, looking back on it, it was a great experience. When it happened, Tyson and I were more training partners than friends. ...But after it was all said and done, I'm glad I did it. Tyson and I have trained quite a bit together and I actually cornered his brother along with him in his last fight. I think we actually became friends and it strengthened our relationship as training partners."

Then again, there's a difference between fighting someone who's just a sparring partner and fighting someone who's a friend. That's why Grudge Training Center coach Trevor Wittman said he encouraged Evans to take the fight against Jones, but would make no such recommendation for the two UFC heavyweights in his own gym – Brendan Schaub and Shane Carwin.

"Those guys are like brothers," Wittman said. "It's not just like they beat each other up in the gym and go home. To them, I think it's more personal. It's more like, I don't want to boost myself off your career. If your career goes downhill off of what I do, that's a big thing to deal with."

Schaub echoed the sentiment, pointing out that he and Carwin have no problem roughing each other up in the gym as long as it's part of an attempt to make the other guy better. Pain is the medium they work in, after all. But stepping on a friend in order to gain a foothold in the rankings?

"It's easy to tell other people they should do it when you're not the one who has to get in there and fight your best friend," Schaub said.

But it's not always a clear dichotomy between best friend and enemy or training partner and stranger. Sometimes, as in the case of Antoni Hardonk's fight with UFC heavyweight Pat Barry at UFC 104, the lines get blurred.

Hardonk and Barry had trained together in Holland over the years, and Hardonk even cornered Barry in a kickboxing match or two before Barry turned his attention toward MMA. Then, in 2009, the two signed to fight each other in the Octagon, and in order to get himself into the proper mental state to fight a guy he knew and liked, Hardonk had to do something slightly out of character.

"I didn't touch gloves before the fight, which was something some people didn't understand and I think some people even got upset about it at the time," he said. "But for me, I wanted to create a little more distance because I know how Patrick is. He likes to smile, tell jokes, give hugs. That's fine after the fight, but not before the fight or during the fight. I needed to let him know: here we are, we're here to fight."

Hardonk lost that bout via second round TKO, but afterwards, he said, he and Barry went right back to being friends.

"I still like Patrick, and I think Patrick still likes me. ...I try to have the mentality where I fight like a shark. A shark swims through the ocean and grabs a fish, but it's nothing personal. It doesn't matter if the fish fights back or if it's easy prey, it's just the shark's job. That's how I always tried to approach it. I try never to have emotions in fighting. It's not personal."

As for the fighters whose objection is based less on the emotional bonds of friendship and more on the practical demands of the gym structure? That's something the sport is still working out. In boxing they often get around the problem by using paid sparring partners who are in it strictly for the cash, rather than teammates who are helping one another prepare out of a sense of duty and compassion.

But as Greg Jackson pointed out, just because the mercenary system works for boxing, and just because that sport doesn't regularly face this specific problem, does that mean it's necessarily the direction MMA wants to gravitate towards?

"I think I speak for all of MMA when I say, we don't want much of the boxing world in MMA," said Jackson. "That's how I feel about it, anyway."