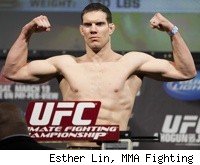 Ricardo Almeida has announced his retirement from MMA competition, citing the difficulties of finding a balance between his UFC career, his role as a father and his jiu-jitsu academy.

Almeida, who first retired in 2004, returned to active competition in 2008 after inking a six-fight deal with the UFC. Soon after the signing, Almeida's son was diagnosed with autism, one of the specific reasons why Almeida has struggled to devote a sufficient amount of time towards fighting.

"MMA is a great sport but also physically and mentally unforgiving. It is a dangerous task to step in the octagon, especially if your focus is not at 100 percent," Almeida said. "After much deliberation since my fight at UFC 128 I have decided to step away from the sport as a fighter."

In his eight fights since returning to active competition, Almeida compiled a respectable 5-3 record in the UFC, which included a brief run for the title in a potential No. 1 contender bout at UFC 86.

First competing in 2000, the 34-year-old Almeida finishes his career with a 13-5 record with the UFC, PRIDE and Pancrase promotions. He competed a total of 11 times for the UFC and is among the few to fight in three different weight classes in the UFC.

In 2003, Almeida captured the Pancrase middleweight title with a first-round submission win over Nate Marquardt.

"I will continue to fully support the UFC as a coach and of course as a big fan," Almeida said.