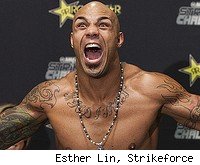 Mike Kyle has been forced to pull out of next week's fight against Gegard Mousasi due to a broken hand suffered in training, Strikeforce director of communications Mike Afromowitz confirmed with MMA Fighting.

Strikeforce is currently looking for a replacement to fight Mousasi, but the organization has yet to sign anyone as of Thursday afternoon.

The Kyle-Mousasi fight was scheduled to be a part of April 9's four-fight card, co-headlined by Nick Diaz vs. Paul Daley and Gilbert Melendez vs. Tatsuya Kawajiri.

Mousasi (30-3-1) is 2-0 since losing his light heavyweight title to Muhammed Lawal last April. He hasn't competed for Strikeforce since the loss to "King Mo."

Also scheduled for the April 9 card in San Diego, is a lightweight bout between Shinya Aoki and Lyle Beerbohm.