Eight Ways of Looking at TUF 13: Lesnar vs. Dos Santos 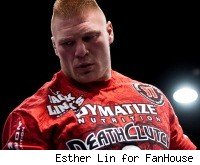 With the first episode of The Ultimate Fighter's 13th season now in the books, we pause to examine our first impressions of coaches Brock Lesnar and Junior dos Santos, with a few other pithy observations mixed in for good measure.

I. Who slipped Brock Lesnar a valium? Okay, maybe it's unfair to expect him to go all 'Hulk smash!' on the first day of filming, but the big man did seem especially low-key throughout the entire first episode. The clips from the rest of the season indicate that this trend may not last, which is good news for ratings even if it might not be so beneficial to his team. Lesnar is a big enough star that his name alone can probably pull viewers, but I bet Spike TV would love to poke him with a cattle prod every now and then to make sure he's still awake.

II. Miles Jury took his torn ACL like a champ. Or maybe like a cyborg. I don't know about you, but when I roll my ankle playing basketball there's at least a minute or two afterward when I entertain the possibility that I may never walk again. This guy tore a ligament in his knee ("one of the bad ones") and still seemed to think that with a little ice and rest he could hang around and train with Lesnar's crew just like anyone else. It was nice of Dana White to let him down gently.

III. Dana White is nowhere near as impressed with the role of wrestling in MMA as Lesnar is. Following the first fight of the season, which Shamar Bailey won on the merits of his takedowns and top control alone, Lesnar implored his team to respect the power of wrestling in this sport. White complained that it was just one guy laying on top of another for two pretty boring rounds. The weirdest part? Both guys were right.

IV. Junior dos Santos' English is better than he thinks. When I heard he was going to be a coach this season, I admit that I wondered whether he'd be able to make himself understood. Judging by the self-effacing remarks he made throughout the debut episode, he wondered the same thing. But honestly, dos Santos seems to have a pretty good grasp on our strange little language. True, it may not exactly be the king's English coming out of his mouth, but we could say the same thing about Matt Serra, and people understood him just fine. Have a little faith, Junior. You're doing okay.

V. Can we all finally agree that it's better to choose the first fight than to get the first pick? Picking the top guy in this competition after such a limited look at them is always a crapshoot. With injuries, the pressures of the house and the competition, and the possibility that some guys simply learn faster than others, it's hard to know who'll be left standing at the end of it all just by watching them wrestle for an hour on the first day. On the other hand, it's a lot easier to spot the weakest prey in the bunch, and having the power to pick on them in the beginning is a huge advantage.

VI. What could Lesnar really have learned during his one-on-one evaluation interviews? It's great that he took a moment to talk to each fighter personally, but what did he expect them to say when he asked why they were there? Even if you had showed up just hoping to be on TV, who would admit that on the first day? And to Brock freaking Lesnar of all people? No way. Even if you're only there to eat free food and live in a Vegas dude-mansion for a few weeks, you say you're there to be the best ever, Mr. Lesnar, sir. Then you try to look like you mean it. I'd love to see the notes Lesnar took during those conversations. Something tells me the entry was remarkably similar for each guy: 'Here to win it all, wants to fight in UFC.'

VII. The UFC's version of past events is always just a little different than how I remember them. When Dana White introduced the coaches for this season he mentioned that Lesnar "ran through everybody" to become UFC champ and dos Santos "stepped away" from a title shot to coach this show. Of course, Lesnar is still just 4-2 overall in the UFC (and one of those wins was against a forty-something light heavyweight in Randy Couture), and dos Santos was actually quite upset about being forced to wait for his title shot when Cain Velasquez got hurt. That doesn't make anything White said about either of them a lie, but neither do his statements have the absolute ring of truth. Is that a big deal? Probably not. But that willingness to make the occasional slight revision is something to keep in mind whenever the UFC pauses to give us a history lesson.

VIII. Can we get through a single season of any reality TV show without someone (or, in this case, two people within about ten minutes of each other) mentioning that no one is here to make friends? I guess I already know the answer to this question, but still. I almost want to see a new reality show where the goal actually is to make as many friends as possible, just to see if someone would slip up and utter this cliché out of sheer force of habit. I got fifty bucks that says it would happen in the first three episodes.