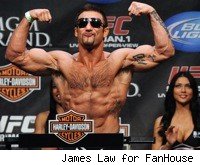 The quickly growing UK-based BAMMA fight organization has already announced its next card will take place on May 21, and with a growing emphasis on recruiting international talent, a pair of American UFC veterans are expected to fight in the next event, MMA Fighting has learned.

Phil Baroni and Frank Trigg have both verbally agreed to separate matches at the upcoming BAMMA 6 card in London, sources with knowledge of the situation have confirmed to MMA Fighting.

The showman Baroni (14-13), most recently fought for the first time since parting ways with the UFC, defeating Nick Nolte via unanimous decision at a Titan Fighting Championships event.

Opponents for the duo are still in the works, though sources with knowledge of the situation told MMA Fighting that both are likely to draw UK-based fighters.

The event will take place at London's Wembley Arena.

BAMMA's most recent event featured British striker and Strikeforce No. 1 welterweight contender Paul Daley, who knocked out Yuya Shirai in the first round. The Feb. 26 card drew over 6,000 fans to the MEN Arena in Manchester.