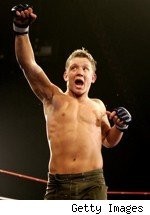 UFC 129 might be the most talked about event in the yet to be written history of MMA in Ontario, but it won't be the first.

The eight-fight card will feature some familiar names to MMA fans: Chris Horodecki, Josh Burkman and Dean Amasinger will all be competing in separate bouts.

The province of Ontario officially legalized MMA on Jan. 1, 2011, and according to Richard Hustwick, Senior Advisor Media and Stakeholder Liasion at the Office of the Athletics Commissioner, the commission began receiving calls from promoters who were interested in holding events in the province shortly thereafter.

"I think it's fair to say everyone would have liked to be the first, but that's not really the priority. I would think it's more just to stage a good, safe fight. UFC was the first to announce their event, but the priority, from our perspective, is the safety of the fighters and to have good match-ups."

According to Hustwick, Ontario has received offers from "about a dozen" promoters interested in holding events in the province and there are currently 22 approved fight cards on the 2011 schedule.

The province has adopted the rules set by the New Jersey State Athletic Control Board.

And while UFC 129 won't be the first event in the province, it can safely claim it will be the biggest and most lucrative MMA event, not only in Canada but in North American MMA history. The UFC has announced that it has sold 55,000 tickets to the event, which equals a live gate of approximately $11 million.