Thiago Silva Admits to Cheating Drug Test, but Only After Being Caught 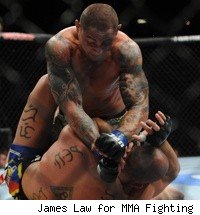 One day after being accused by the NSAC of submitting an intentionally altered urine sample prior to UFC 125, Thiago Silva has come clean...so to speak. In a statement posted to the Underground Forum by the American Top Team, Silva admitted to using a "urine adulterant" in an attempt to conceal his use of banned substances in the weeks leading up to the fight.

In other words, now that he's been officially caught, he's willing to own up to his mistake.

Such was not the case as recently as a few weeks ago, when he responded to news that his urine sample was still processing by declaring, "My blood is clean. I haven't used anything."

That wasn't true, of course, and he knew it wasn't true. It just hadn't been proven untrue yet.

According to Silva's statement, he reinjured his back 45 days before his bout with Brandon Vera and then made the decision to "take injections in my back and spine that contained substances prohibited by the Nevada Athletic Commission."


Then, the statement says, in order not to get caught by the NSAC for his use of banned substances, Silva "made the decision to use a product to hide the presence of these substances in a urine test."

Turns out that didn't work so well, so now he's fessing up to the whole thing and agreeing to accept the NSAC's punishment -- most likely a fine, suspension, and a change in the bout's result from a win for Silva to a 'no contest' -- without appeal. Good for him. Sort of.

While it is refreshing to see a professional athlete own up to using banned substances, the fact that many sports fans regard this as a surprising or even noble act probably says more about the nature of performance-enhancing drugs in pro sports than it does about Silva's character.

Let's not forget, he was perfectly willing to lie about his banned substance use in the press when he thought there was still a chance he might get away with it. Admitting to it only after he's been caught by lab tests doesn't necessarily prove that he's a man of honor, but rather that he's a man who knows when the jig is up. He's opting to forego the sad charade of the appeal and accept whatever fine and suspension is coming his way, which is somewhat novel, but we can't say for sure whether he's doing it because it's the right thing to do or because he knows an appeal would be futile at this point.


The good news for Silva is that sports fans are a forgiving bunch. They've been lied to by so many different athletes that they will actually applaud you for admitting to being a cheater, if only because it happens so rarely. When you do the mea culpa dance and take your slap on the wrist, they forgive and forget and move on relatively quickly. When you opt to go with the TFD defense (Total [Freaking] Denial), they might never let you forget it.

Of course, Silva already dabbled in denial when his urine sample was initially flagged in February. He knew then, just as he knew when he submitted the original sample before the Vera fight, that he had cheated and tried to cover it up. There's a very good reason why he didn't jump up to accept responsibility back when the sample was in processing limbo: he was still hoping he might get away with it.

Maybe the lab would screw it up. Maybe the results would be too inconclusive to constitute a failed test. Basically, he was hoping to get off on a technicality for an offense he knew himself to be guilty of.

That didn't work, so now he's cutting his losses and accepting the blame. Again, that's still preferable to the route many other athletes choose, which is to stake out an unconvincing lie and stick with it until the bitter end. Silva is admitting to his mistake, even if he only decided to do it after he'd been backed into a corner by cold, hard evidence.

If Silva's story about a back injury and subsequent injections of unnamed substances is legit, then it's hard not to feel for the guy on some level. He has to fight to pay his bills, and he can't do that if he's too hurt to get in the cage. A lot of us would be tempted to skirt the rules in that situation – if indeed that was the situation – so we can forgive Silva more readily than we would forgive someone who was simply trying to gain an unfair advantage.

At the same time, let's acknowledge this admission for what it is. Silva is accepting responsibility for his transgressions, but only after they've been proven. He's taking the blame only once it seems like the lesser of two evils.

Yes, that's still better than the path other athletes have chosen, but that alone doesn't make it a righteous path; It just makes it the less traveled path. And that, more than anything else, ought to tell us something.